Princess Ida, or Castle Adamant, is a comic opera with music by Arthur Sullivan and libretto by W. S. Gilbert. It opened at the Savoy Theatre on January 5, 1884, for a run of 246 performances. By Savoy Opera standards, it was not considered a success (a particularly hot summer in London did not help ticket sales), and it was not revived in London until 1919. This was the eighth collaboration between Gilbert and Sullivan.

Princess Ida is based on Tennyson's poem The Princess. Gilbert had written a blank verse parody of the same material in 1870. According to biographer Hesketh Pearson, Gilbert lifted parts of the dialogue from the earlier play into the libretto. Princess Ida thus became the only Gilbert and Sullivan work with dialogue entirely in blank verse. It is also the only one of their works in three acts.

The opera satirizes feminism, women's education, and Darwinian evolution, all of which were controversial topics in conservative Victorian England. Like the Patience and Iolanthe, Ida concerns the war between the sexes. Whereas, in Patience, the aesthetic-crazed women are contrasted with vain military men; and in Iolanthe, the vague and flighty fairies (women) are pitted against the ineffective, dim-witted peers (men); in Ida, overly serious students and professors at a women's university (women) defy a marriage-by-force ultimatum by a militaristic king and his testosterone-laden court (men).

Sullivan's score is majestic, and a sequence of songs in Act II, sometimes known as the "string of pearls", is particularly well loved. Although Gilbert's libretto contains some very funny lines, the iambic pentameter and three act structure tend to make it more difficult than some of the other Savoy Operas to keep the audience's interest to the end. In addition, modern audiences sometimes find the libretto's stereotyped portayal of sex roles and the awkward resolution of the opera unsatisfying. 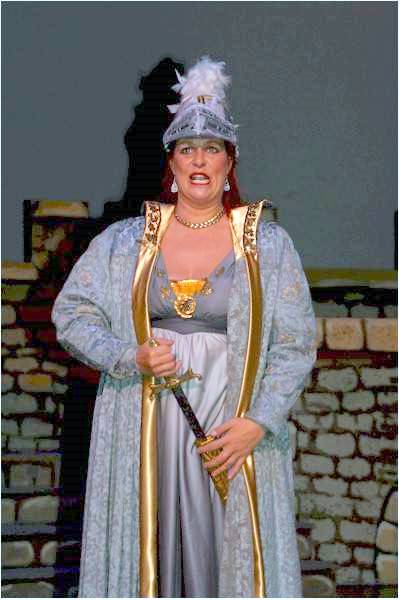 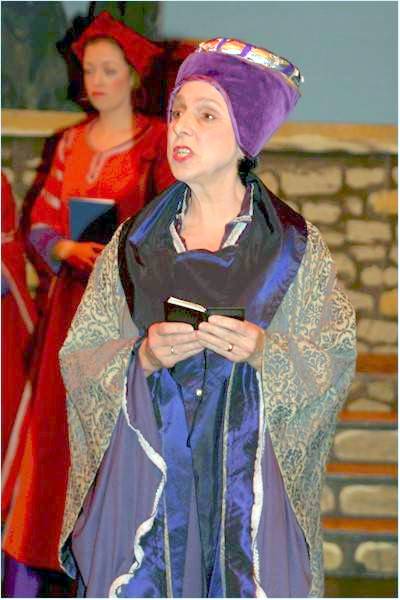 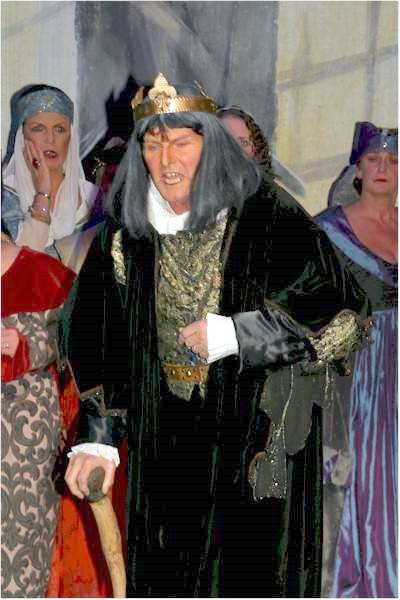 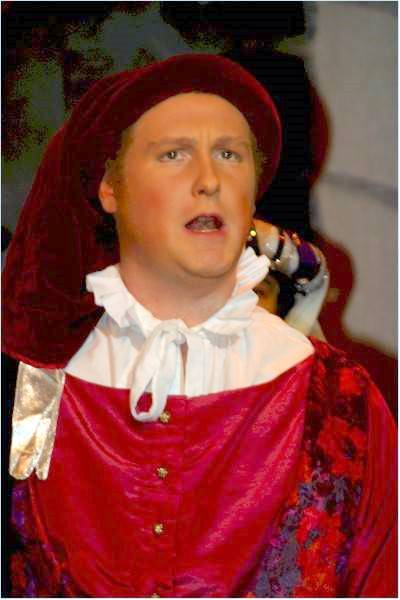 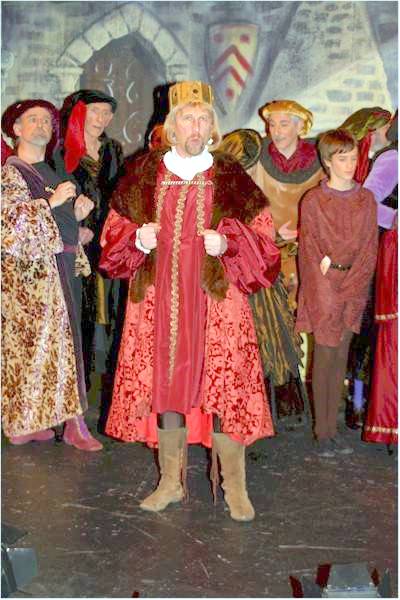 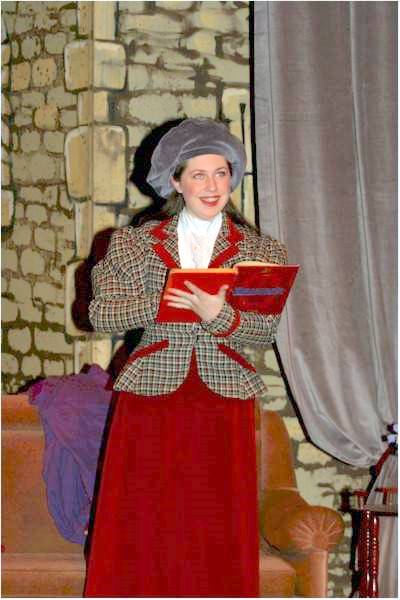 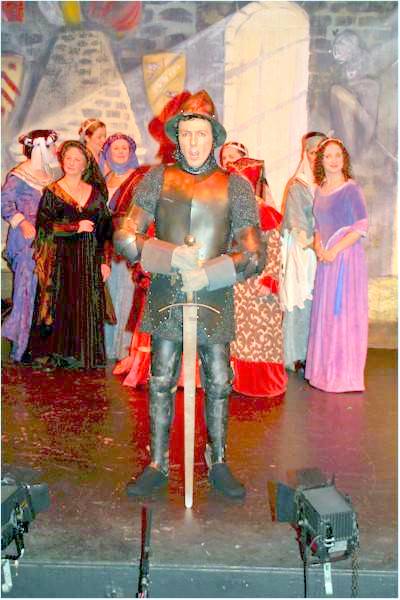 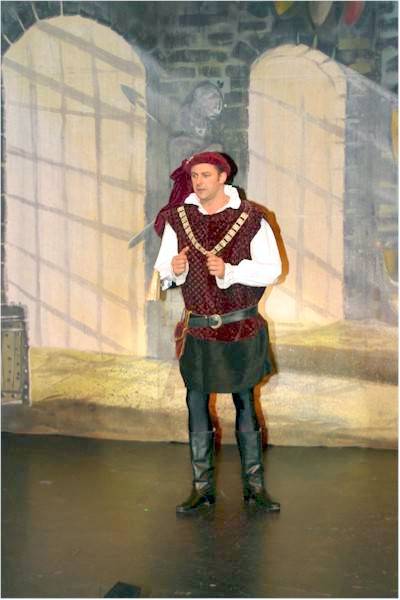 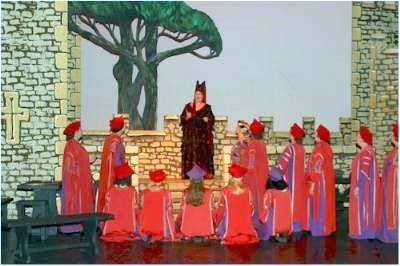 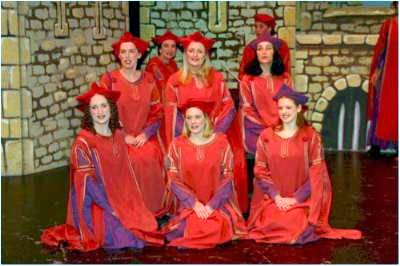 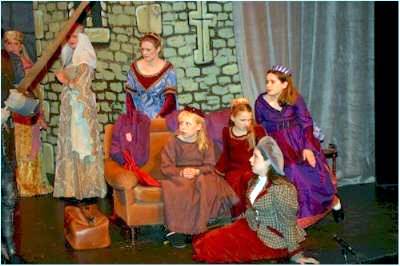 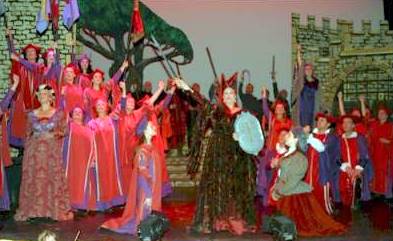 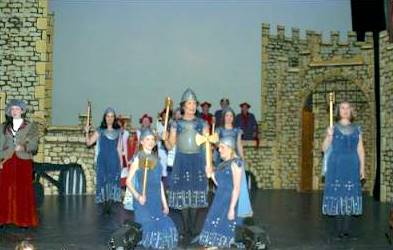 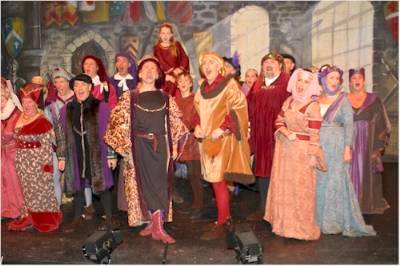 One thing you can always be sure of, about a production by Alison Cooper, is that it will be different from anything done previously. As a Director for the Opera Club, she has the knack of finding a different approach for the operettas of Gilbert and Sullivan. Her production of Princess Ida at the Harlequin, neatly bridged the gap between the Tudor and Victorian period. When, in 1883 Gilbert based his plot on the poem The Princess by Tennyson, he set it in Medieval times, but with the morals and outlook of his day, Girton and the London School of Medicine for Women having just been established.

It was a satire on the idea of female emancipation, a women's college where the students were taught that they could manage without men, with the final twist that if they did not have children, where was the next generation coming from? Pre-cloning of course!

So the opening, during the musical prelude, was the entry of new students to Adamant College in 1884. In the corner of the entrance hall was a brown sofa and on this, one of the students (Eleanor Parks-Young) sat down to read the history of the college. Her imagination brings to life the characters of an earlier period, when Princess Ida had founded it as a retreat from men.

Lit by a speckly light they come into the room and the college is now the court of King Hildebrand, but of course with the student sitting on a sofa in the corner. Several of the soloists then sing to her, telling her their stories, which worked well, but the brown sofa did seem out of place, especially in the next scene set in the college in Tudor times.

By now the student, who is after all imagining this, has joined in with the students as a member of the chorus. At the end of the opera, the characters fade back into the speckly light, the student who has fallen asleep on the sofa, wakes up and is led off to her dormitory. An excellent performance throughout.

Sarah Esser as Ida was magnificent, a contralto in Wagnerian style - absolutely the type who Gilbert would have chosen. Brenda Judd playing Lady Blanche for at least the third time, used her contralto to good effect and put over well her bitterness at not being in charge. Jane Hogg's Lady Psyche brought out effectively the contrast between the two teachers.

Kevin Stuart was impressive as King Hildebrand, but despite the makeup did not really look old enough to have Neil Williams as his son Hilarion. Fine performance as the son and also from David Brown and Alistair Lindsey-Renton as his friends. David Longes's King Gama was a masterpiece of ageing with a well-twisted body, a great characterisation.

The Chorus was excellent, costumes perfect for the period and the hired-in set worked well. Angela Barker kept the orchestra under control, although in one or two places they did manage to drown out the soloists. A brilliant production with the fresh ideas making it more interesting.

Within NODA, Representatives are, on occasion, invited to attend shows by Affiliated Societies in Regions other than the one with which they are normally associated. For this reason I was pleased to receive tickets for your production of "Princess Ida" as a result of my colleague Lance Milton being otherwise engaged. My pleasure at being invited was increased because this work is less well known to me than others in the G & S canon, simply because few amateur operatic societies choose to include it in their programmes. Therefore I came with my wife, Jackie, to the Harlequin full of eager anticipation and I am pleased to say we were not disappointed.

In presenting the piece, the Director, Alison Cooper, had decided to encompass the medieval tale within the device of a dream experienced by one of three new students to a ladies college in Victorian times. Although this device allowed the student to see herself within the dream as it unfolded her different costume sometimes made her seem incongruous. Nevertheless the integration of the two periods allowed the robes to be donned later by Hilarion and his friends to be conveniently placed.

This G & S operetta is the only one presented in three Acts, and whilst the location for each Act changes the scenery designed allowed the different settings to be created generally by using and rearranging the same pieces for each of them. Colours and tones with which they were painted were appropriate for the medieval period with a particularly well-painted traverse cloth for the First Act.

With the members of the chorus representing different characters in each Act, a large number of costumes were required. The quality of those supplied for chorus and principals reflected the high standards normally expected from Haslemere Wardrobe.

In my opinion, the Lighting design and the execution of the plot was particularly noteworthy with interesting variations of colour washes on the eye and the use of levels that helped create harmonious tableaux particularly at the end of each Act.

Make up was fine, Gama looking suitably ugly and deformed, and the bewigged Hildebrand looking much older than Kevin Stuart.

Angela Barker directed the large orchestra with her usual skill, energy and enthusiasm. The musicians responded appropriately and well deserved the reception they received at the Final Curtain. On one occasion it appeared that the fast pace at which one of the "patter" songs was taken resulted in its words not being clearly heard.

By the attention paid to the creation of meaningful small groups from the large cast Alison Cooper suggested the different interests of those in them instead of allowing them to form a homogenous mass. Many of those in the chorus were particularly animated and responded suitably by expression and gesture to each speech or action being enacted. As an ensemble they produced an impressive volume of sound for the chorus numbers.

The principals were well chosen and all sang creditably. Neil Williams as Hildebrand's son looked suitably heroic and serious in his pursuit of Ida. Florian was played more light-heartedly by Alistair Lindsey-Renton with a marked display of skittishness when dressed in women's robes. David Brown as Cyril provided a steadying influence on them both. Their more sober counterparts, Gama's sons were portrayed by David Pond (Arac), Simon Cooksey (Guron) and Chris Watkins (Scynthius), all looking appropriately fierce and warlike.

Sarah Esser, magnificently dressed, played the lead Princess Ida. Whilst I enjoyed her singing throughout, on one occasion the upstage position taken for "Minerva" resulted in her being partly drowned by the orchestra. Jane Hogg looked and sounded most elegant as Lady Psyche and Brenda Judd was splendid in the unsympathetic role of Lady Blanche.

Untypically, David Longes seemed to enjoy his role as the unpleasant King Gama and Kevin Stuart gave a sterling performance as Hildebrand.

The Harlequin is an excellent venue for Societies' performances, all seats in the auditorium providing a good view of the stage, and this is enhanced by first class Front of House facilities. The excellent quality of the programme with its beautiful cover and the information about the company and the piece contained therein helps create an atmosphere for theatregoing that overcomes many of the ideas that some of the public have about amateur theatre.

My wife, Jackie, and I thoroughly enjoyed our evening in your company and appreciated being met by Clare Padbury before the show and having the opportunity to discuss it with Angela Terribile, Kevin Stuart and Angela Barker after it was all over.