The story is set during the Reign of Terror of the French Revolution. Sir Percy Blakeney, a wealthy English aristocrat, has married the beautiful French actress Marguerite St. Just. However, on the night of their wedding, Percy learns that his wife betrayed his friend the Marquis de St. Cyr to the Revolutionary government, ultimately leading to the Marquis' execution by the guillotine. The Blakeneys' marriage grows cold and Percy determines to make amends for his friend's death by saving other innocents from the guillotine. Thus, he takes on the identity of 'the Scarlet Pimpernel' and convinces some of his friends (subsequently called 'bounders') to join him in his daring rescue attempts. The band pretend to be inane fops, effectively throwing off any suspicions about the identity of the League of the Scarlet Pimpernel.

Soon, the French agent Chauvelin is sent to England with orders to discover the identity of the Scarlet Pimpernel. He enlists the aid of Marguerite, threatening to have her brother Armand, also a member of the League, guillotined if she refuses.

Marguerite manages to have a conversation with the Scarlet Pimpernel, who remains hidden in the shadows, keeping his identity concealed. She tells him of Chauvelin's plans and explains that she betrayed the Marquis de St. Cyr under coercion. The Scarlet Pimpernel, Percy, sets out for France in order to save Armand. Still unaware of the Pimpernel's identity, Marguerite does the same. Disguised as a tart, Marguerite attempts to uncover information about her brother, but is quickly recognized and apprehended by Chauvelin. Marguerite finds her brother Armand in prison, but Chauvelin allows the two to escape, knowing that Armand will head for the hide-out of the Scarlet Pimpernel. They find him in a town on the French coast, where Marguerite learns her husband's true identity. Chauvelin confronts the Scarlet Pimpernel but is outwitted once again. Percy, Marguerite, and Armand escape safely to England. 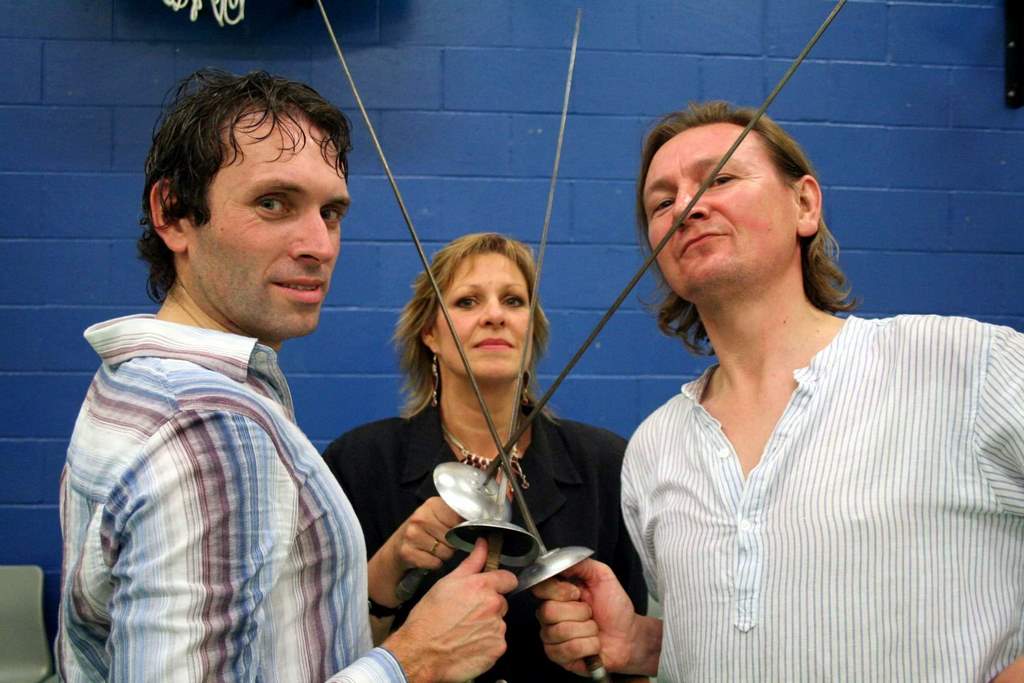 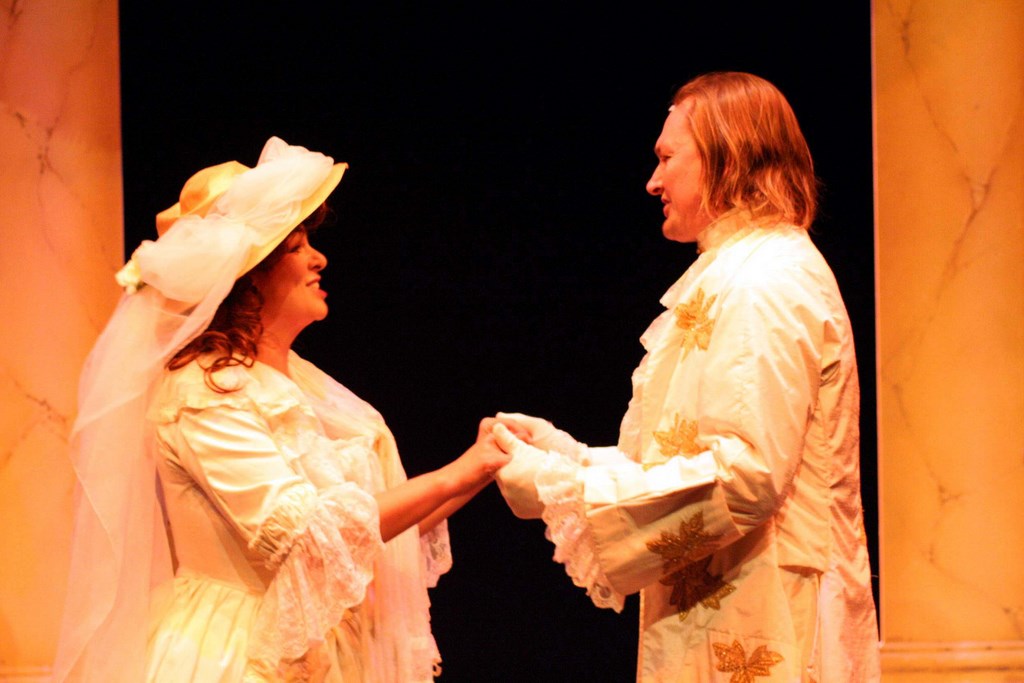 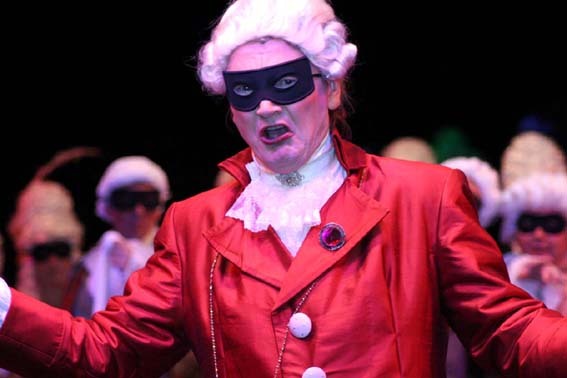 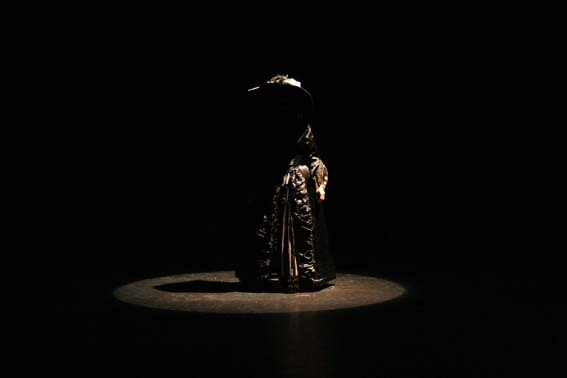 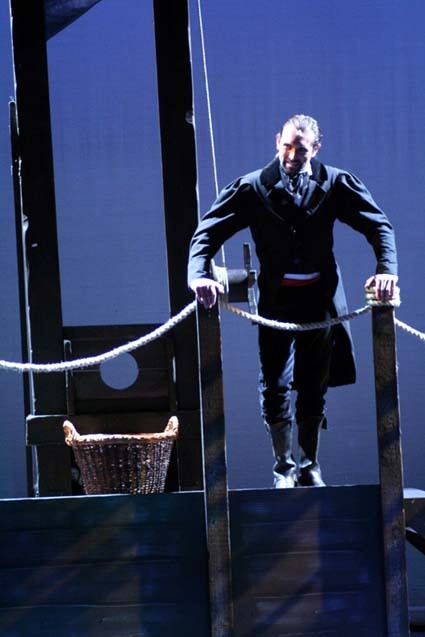 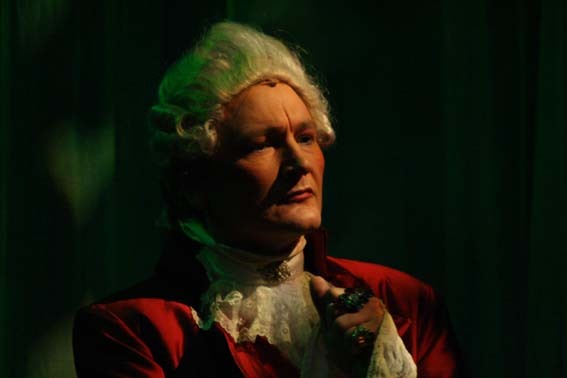 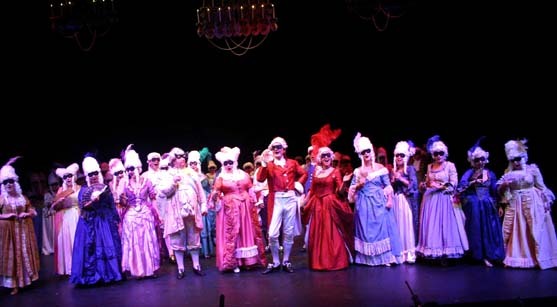 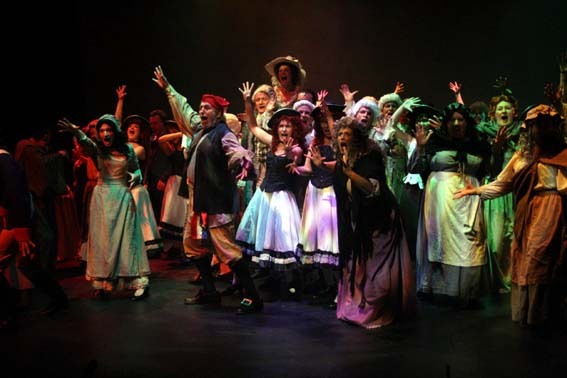 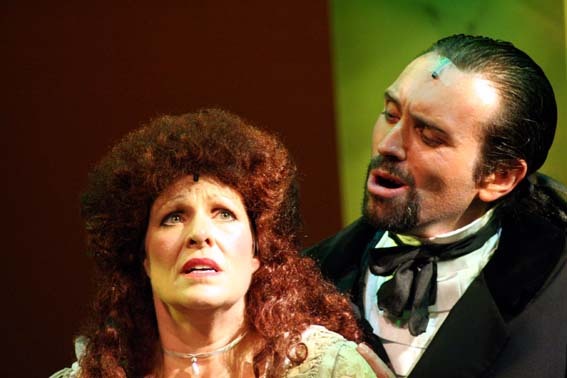 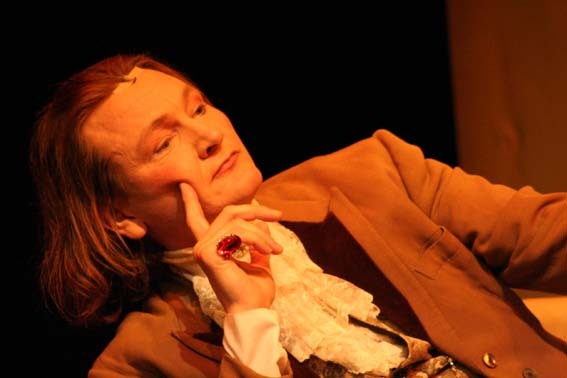 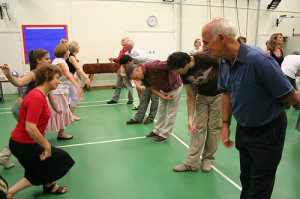 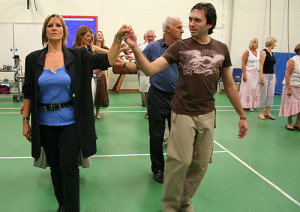 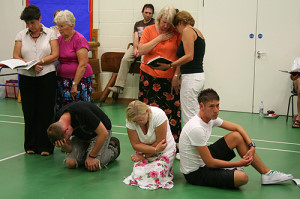 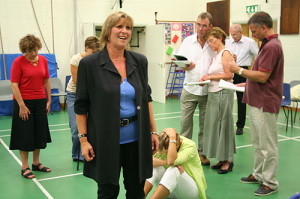 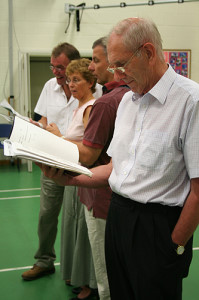 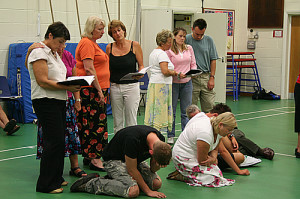 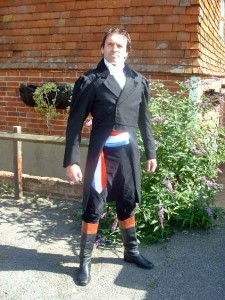 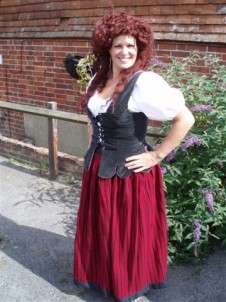 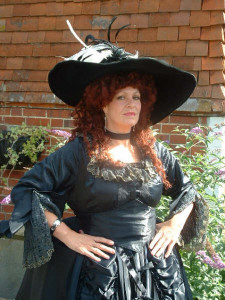 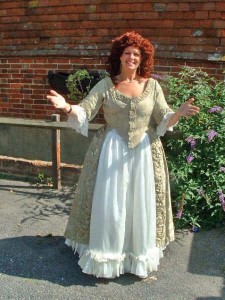 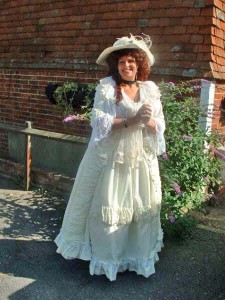 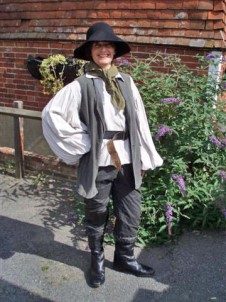 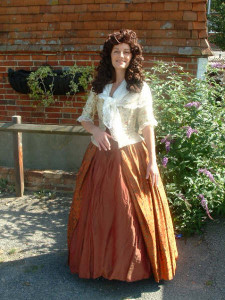 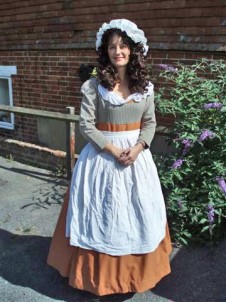 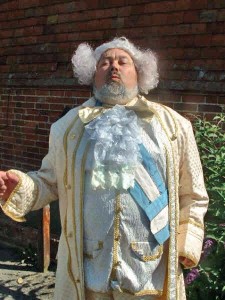 Tony Flook : Reproduced by permission of the Surrey Mirror

Perhaps the most puzzling thing about The Scarlet Pimpernel is why it's never been performed in the West End and has taken so long to reach the non-professional stage. Here's a strong story (if giving a frivolous treatment to a tragic historical event) combined with better music than in many shows. The upside is that it came fresh to most of us.

The opening number, appropriately identified as Storybook, indicated that we could expect a tongue-in-cheek take on the subject. The illusion was quickly shattered as a frighteningly realistic-looking guillotine dominated the stage. The split-second white-out as the blade fell on a hapless victim was just one example of Ian Fagg's imaginative lighting and of the attention to artistic detail that went into every facet of the production.

Peter Thomas inhabited the central role as if born to it. His stage presence and feel for mood were vital to the success of the production. He slipped effortlessly from the persona of the oh-so-foppish self-indulgent Sir Percy Blakeney to that of the dashing Pimpernel leading his team of determined rescuers, collectively known as 'the Bounders'. His singing voice was equal to every demand whether in his soliloquy, Prayer, or the driving Into the Fire.

Francis Radford was equally impressive as his adversary, the revolutionary, Chauvelin - a villain reminiscent of melodrama. He was never better than in his demanding solo Falcon in the Dive.

Sarah Esser showed the different facets of Marguerite - in love with her husband, Percy, with whom she shared the tender You are My Home and tormented by the bloodshed in France, her homeland. Her I'll Forget You was particularly telling.

Ensemble work was perfectly honed. The Gavotte, which together with all the other dance sequences was choreographed by the director, Alison Cooper, conveyed impressive images of the lifestyle of England's pampered nobility. Costumes throughout were well worthy of the production.

Angela Barker and her orchestra had barely a break as the story was told mainly through its 26 musical numbers, in almost operatic fashion. Unfortunately, the score calls for instrumental support under some passages of dialogue, which meant that the actors' speech was occasionally overpowered.

After being something of a theatrical 'sleeper' for some years and only recently having been made available to amateur societies, The Scarlet Pimpernel has now generated considerable interest and I expect to see it being staged again in the area before too long. Although I look forward to watching this refreshing show again - and maybe again - The Opera Club has set the bar high with this, its first staging in Surrey.

Initially released in 1998 and billed as "Broadway’s most intriguing musical", Scarlet Pimpernel has just been released to the amateur circuit. It is an exciting piece reminiscent of Les Miserables but with tongue in cheek and a happy ending. Many people will have read the books as youngsters or seen one of the many film and television versions. It has a good story line with scope for drama apiece and a wonderful score; one wonders why it was not better received in London, as the overall impression from this performance was of a musical worthy of a long run in the West End.

The overall production of the show was excellent, with slick scene changes courtesy of the minimalist and yet very atmospheric set, many props being set by the cast members, and others by a small but efficient crew - the costuming of whom made a subtle but worthwhile difference to the flow of the show. Costuming of the whole show was extremely impressive, with good contrast between the poor and rich, and giving a very rich visual air to many scenes. Act 2 opened to serried ranks of masked and wigged performers clad in sumptuous satins and silks – spectacular!

Lighting was also very fine, with effects ranging from the subtle to the dramatic, being applied in a very timely and professional fashion, and the sound too was accurate and unobtrusive. This was particularly important as much dialogue was underscored, but the principals’ words came over clearly.

In form, the show is dominated by a trio of principals; Sir Percy Blakeney, Marguerite, his wife, and her ex lover Citizen Chauvelin. The complete success of the piece depends upon the acting and singing skills of these three and we were not disappointed.

Peter Thomas as the foppish Sir Percy Blakeney and his alter ego The Scarlet Pimpernel switched effortlessly between romantic hero and foolish bore, singing very competently throughout. He shone as the tender new husband, tore at our hearts as the (mistakenly) duped lover, sparkled as the life and soul of the ball, impressed us with his sword fighting technique and convinced us with his cry to arms in the defence of the innocent nobles of France. He even managed a brief but effective spell as the mysterious Belgian spy, Grappin.

Francis Radford as the villain, Chauvelin was consistent and menacing, with some very fine singing in "Falcon in the Dive" and "Where’s the Girl?". Despite the programme note to the contrary, his French accent was faultless. It is an interesting twist to use the villain as a secondary love interest and clothed from head to toe in black and with his dark good looks, he was both delightfully sinister and deliciously sexy. There were moments of sheer poignancy when the heroine was tempted to return to his arms - we could fully understand why, although her husband was equally tall and dashing.

Sarah Esser as Marguerite St. Just, Percy’s wife and Armand’s sister, sang beautifully throughout, perhaps having the most tuneful numbers of the piece; "Storybook", "When I Look at You", and "I’ll Forget You"; the latter was so beautiful that I had to dive for my hanky – together with many others in the audience! She captured the bewilderment of the new bride rejected (for mistaken motives) by her husband very effectively.

Sir Percy’s Bounders, made a very strong and consistent contribution to the piece. These performers were obviously very much "into" their parts, and perhaps enjoyed themselves more than anyone else! They were very much a group of individuals, however clever writing together with good direction and personal style led to a delightful team effort. Their two rousing numbers with the Pimpernel, "Into the Fire" and "Creation of Man " were exceptional and contributed considerably to audience enjoyment. I would have liked to seen more extravagant lace and jewellery about their persons for the latter number but this is a very minor point.

Ensemble direction was very effective, with "Madame Guillotine" and the "Gavotte" being particularly impressive, and the whole company played well. Michael Saunders (Armand St. Just) was a convincing and emotional younger brother to Marguerite, John Rapley, with his measured delivery, made a suitably menacing Robespierre, and all of the smaller parts- Brenda Judd as Mrs. Jessup, Fiona Radford as the young Madame Tussaud, Ian Stone as the Prince of Wales, Colin Bousfield as Coupeau, Mark Nicholson as Tussaud, and Kevin Wood as St. Cyr, as well as the unnamed group of female servants, were convincing and contributed strongly to the faultless production.

The whole show was complemented by a fine orchestra under the direction of Angela Barker, who controlled a very complicated score seemingly with little effort, and blended beautifully and unobtrusively with both ensemble and principal singing. Although she made it look easy this must have taken considerable effort, as the show is very nearly through scored, with many changes of mood, tempo, and volume to cope with. Working with the skill of a true professional she allowed none of this to obtrude upon the overall performance.

Full credit must go to Director/Choreographer Alison Cooper. She is a talented artist who used her considerable expertise to the full to bring us this superbly atmospheric and entertaining show. It seems a great shame that this was her swan song and I hope that she will be occasionally tempted out of retirement so that we can enjoy her work again in the future.

At a ticket price of £13 this was exceptional value for money for a very good evening’s entertainment. I was pleased to see the full house, even though this is new and therefore unknown. Pimpernel will be difficult to top but I am already looking forward to seeing what I am confident will be Opera Club’s next first rate show.