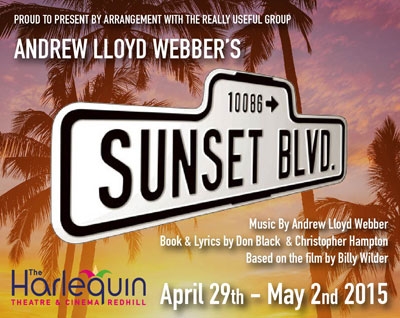 Sunset Boulevard  the musical with book and lyrics by Don Black and Christopher Hampton and music by Andrew Lloyd Webber is based on Billy Wilder's Academy Award-winning 1950 film of the same title,

Opening first in London in 1993, the musical has had several long runs internationally and also enjoyed extensive tours.

All Weekday rehearsals will start at 7.30pm and end at 10 pm unless otherwise stated

Sunday Rehearsals will be from 2pm – 6pm

Thank you to everyone who auditioned today.

Auditions can be very daunting but everyone did brilliantly and we are lucky to have had so many talented people to choose from even if it did make the process very difficult for the Audition Committee.

Although not introduced today we did have an independent Committee member with us and we are very grateful to Jackie Rance for being a part of the audition process and also pleased that she will be attending the Chorus auditions on Thursday 22nd January and the Principal recalls on Monday 26th January.

The Cast to date is as follows –

This time Next Year

Sunset Boulevard the musical with book and lyrics by Don Black and Christopher Hampton and music by Andrew Lloyd Webber is based on Billy Wilder's Academy Award-winning 1950 film of the same title, Opening first in London in 1993, the musical has had several long runs internationally and also enjoyed extensive tours.

In 1949 Hollywood, down-on-his-luck screenwriter Joe Gillis tries to hustle up some work at Paramount Studios. He meets with a producer who shoots down his proposed script as well as a request for a loan to bring his car payments up to date. He does, however, meet Betty Schaefer, a pretty, young script editor who proposes they work together to develop one of his earlier projects. As they chat, Joe is spotted by car repossession agents and makes a quick escape.

During the car chase that ensues down Sunset Boulevard, Joe evades his pursuers by pulling into the garage of a dilapidated mansion. Beckoned inside the house, Joe encounters Norma Desmond. A one time famous star of silent films, who lives in the once luxurious Hollywood mansion on Sunset Boulevard attended to only by Max Von Mayerling. Joe Gillis, is enlisted to work on a script Norma has written with which she hopes to make a "return". Joe finds himself in servitude and a love affair, enmeshed in Norma’s fantasies of coming glory. He tries to escape but she attempts suicide and he returns. He sneaks out at night to write his own script with Betty Schaeffer a girl he eventually falls in love with. When he eventually tells Norma the truth about her own fantasies, she shoots him. The shock tips the balance in her mind and she walks downstairs to be arrested, believing the cameras and crowds are to welcome her return to the screen.

Hollywood is a great place if you’re a hot movie star or director. But if your career is on the slide, or if you’re struggling to get established, Hollywood is a hard place to exist in. The ensemble characters are all struggling to get or keep their respective piece of the movie business. Norma schemes to return to the screen as the star she once was. Joe tries to sell his story ideas so he can get studio work. Betty’s a low-paid script reader who dreams of becoming a writer. Artie Green struggles in his apprenticeship as a assistant director. Producer Sheldrake searches for his next hit movie so he can keep his job and afford his fabulous home.

Sunset Boulevard epitomises the shallowness (for most) of the Hollywood lifestyle.

All ages quoted are “Playing Ages”

A faded movie star from the silent film era. She is emotionally flamboyant, vulnerable, passionate and fragile. She has moments of melancholy which lead to fits and suicide attempts. She still seeks adulation and lives her life as if she were a character from one of her movies. Norma can be manipulative and is not afraid to use her money, power, sexual prowess or fame to get what she wants.

Now dont you give me a fancy price ... I am big the pictures got small

What time are they supposed to get here ... Max get me a taxi.

I cant go on with the scene... I'm ready for my close up

A down and out struggling screenwriter. He has all but given up on what Hollywood has and isn’t taken in by the glamorous, rich and famous life style until he meets Norma. He is sarcastic, cynical, bitter and glib. Joe possesses a certain sexual magnetism that women are drawn to and is charming, with an opportunist-like quality.

Now dont you give me a fancy price ... I am big the pictures got small

What time are they supposed to get here ... Max get me a taxi.

In december... since I arrived

The long time suffering and devoted caretaker/butler to Norma. He actually was a successful movie director and the first husband to Norma Desmond. His life has now resorted to nurturing Norma and her illusions to help her survive. He has a quiet but commanding presence, brooding, protective, and watchful. He can be volatile. Max speaks with a slight Germanic accent.

A young, clean cut script reader at Paramount Studios. She’s sweet, eager, feisty, and bright; a real go getter. Unlike most she is still idealistic and enthusiastic about the Hollywood scene. Betty sincerely wants to work with Joe and eventually falls in love with him.

The legendary film director at Paramount Studios and famous for his Hollywood epic movies and creating stars. He is autocratic but loving and protective of Norma. He is strong and imposing, but well respected.

Mr DeMille ... give me minute

Well,Well Well... Come on in

He is a good guy and is Joe’s best buddy. He is loyal, hardworking, generous, professional, outgoing, clean-cut and an all around nice guy and a go getter.

A movie producer on the lot at paramount. Slightly cynical and mounful.

Joe what the heck brings you here to .. Good!

The ensemble is critical in making this piece work as they represent the fabric that is the Hollywood film business and all that is good, bad and selfish about it. All the characters are chasing the same dream and we need to understand the desperation of Norma's world and that of the aspiring next generation. Paramount studios would not have existed if it had not been for the likes of Norma Desmond.

Ensemble: There are over 50 singing/speaking roles that will be played by the ensemble. Many of these roles are strongly featured and ensemble members will be required to create clearly defined characters that stand out.