Sweet Charity tells the story of an optimistic young woman named Charity Hope Valentine, who works as a taxi dancer in a disreputable establishment, the Fandango Ballroom. A true romantic, she hopes to find true love and escape. Though every man she meets breaks her heart, she continues to be hopeful. 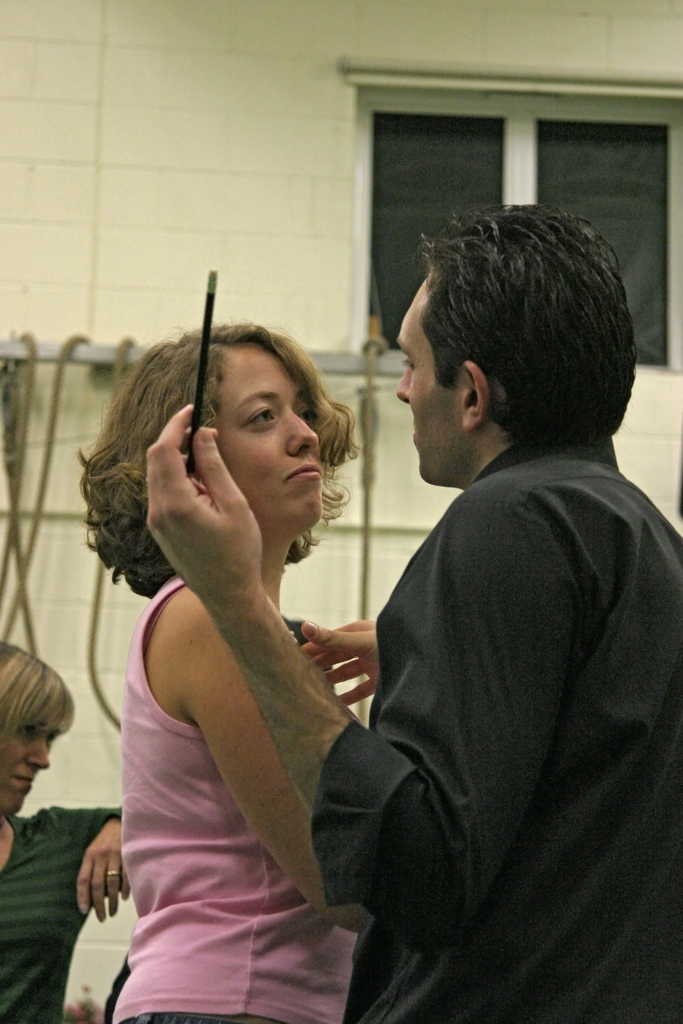 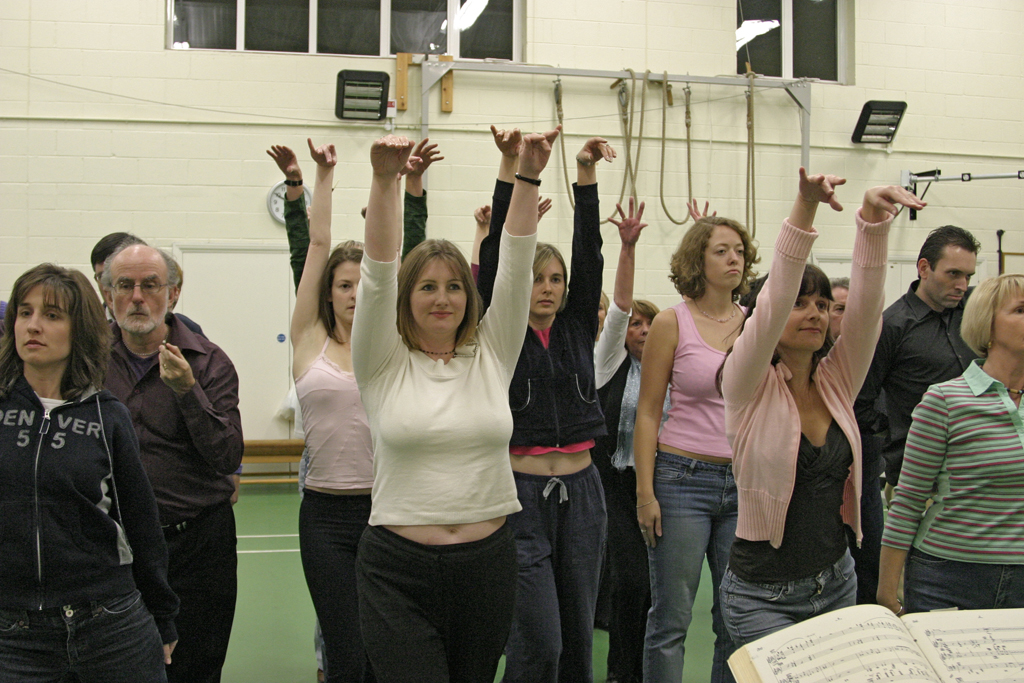 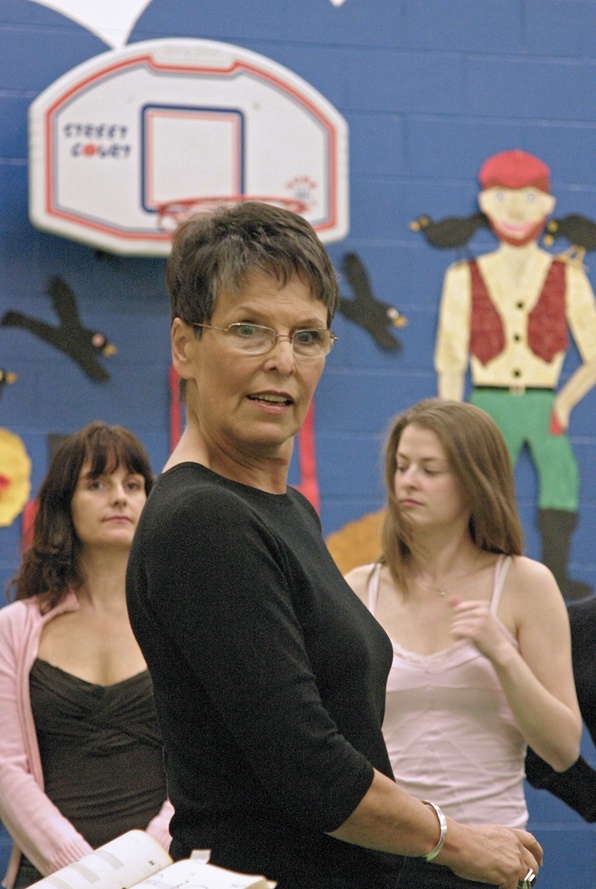 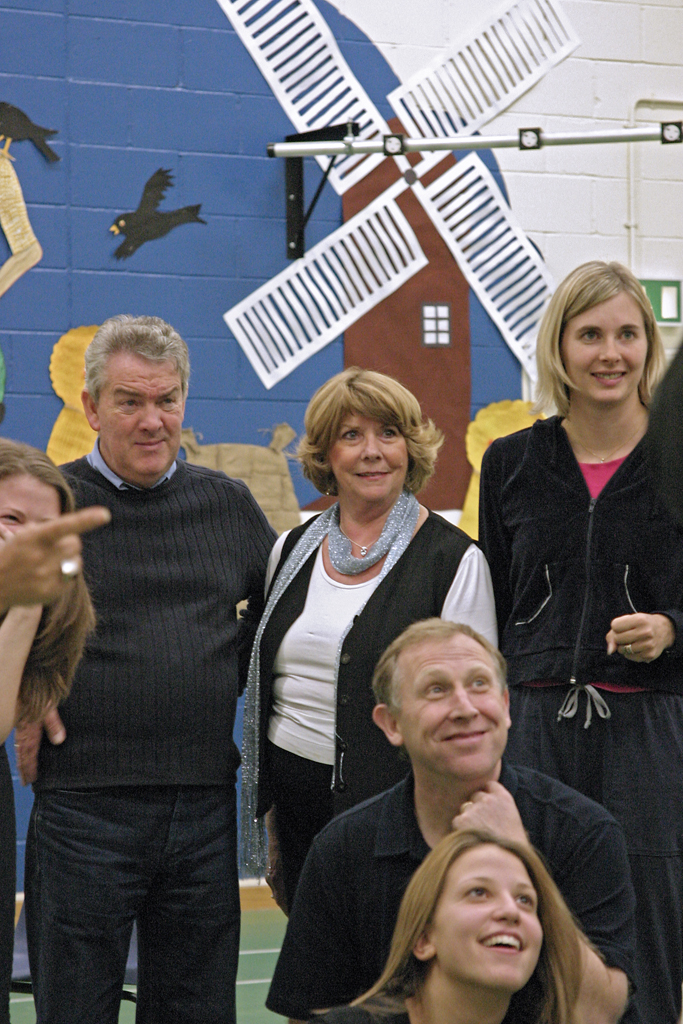 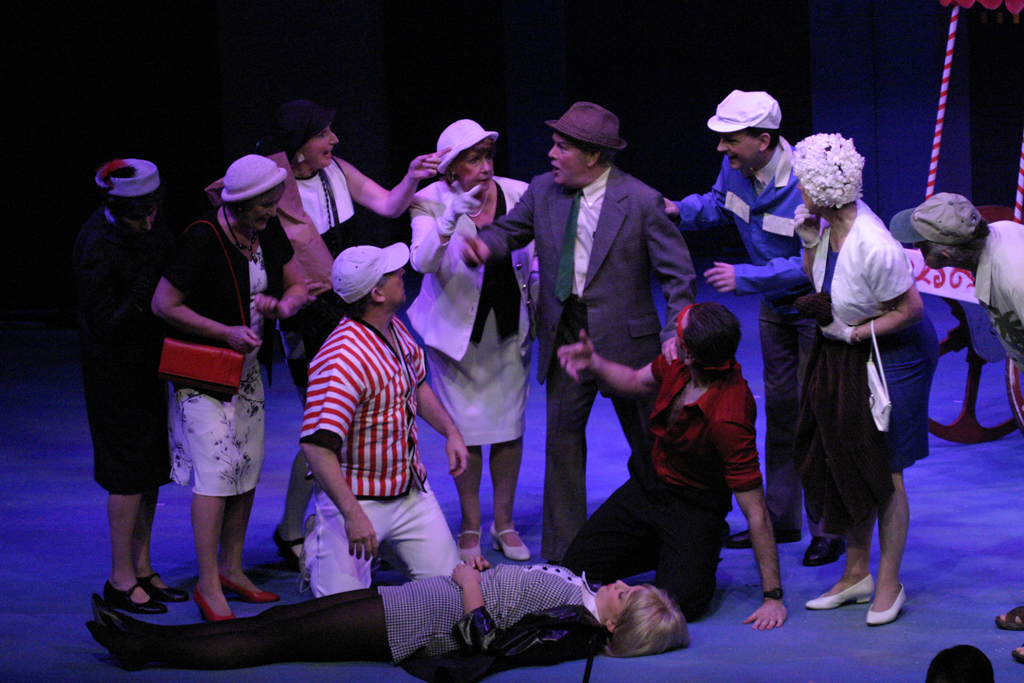 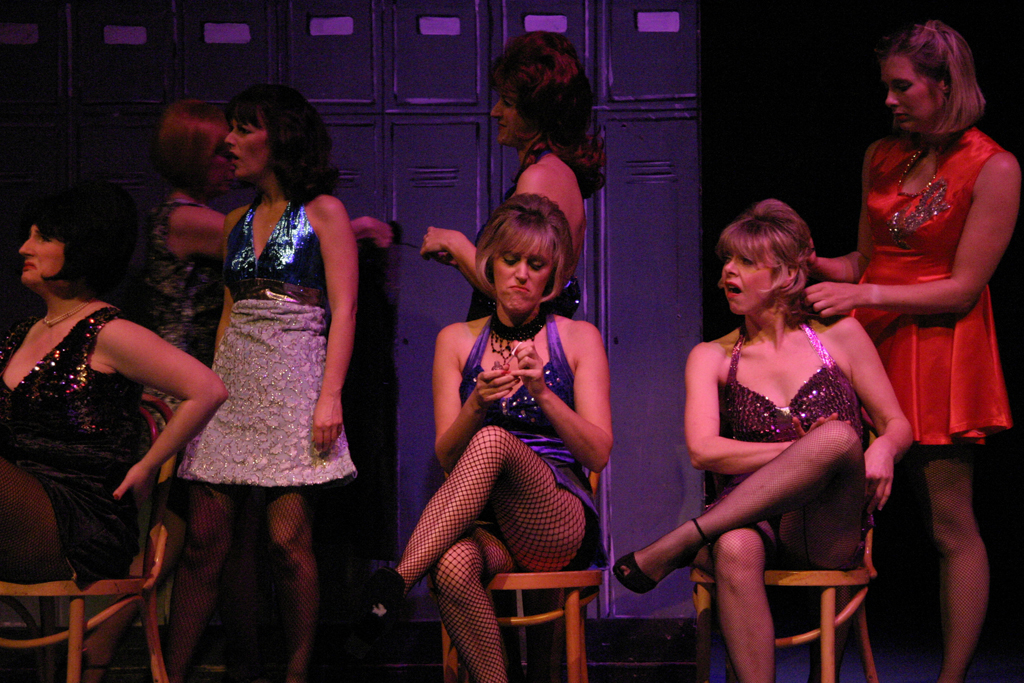 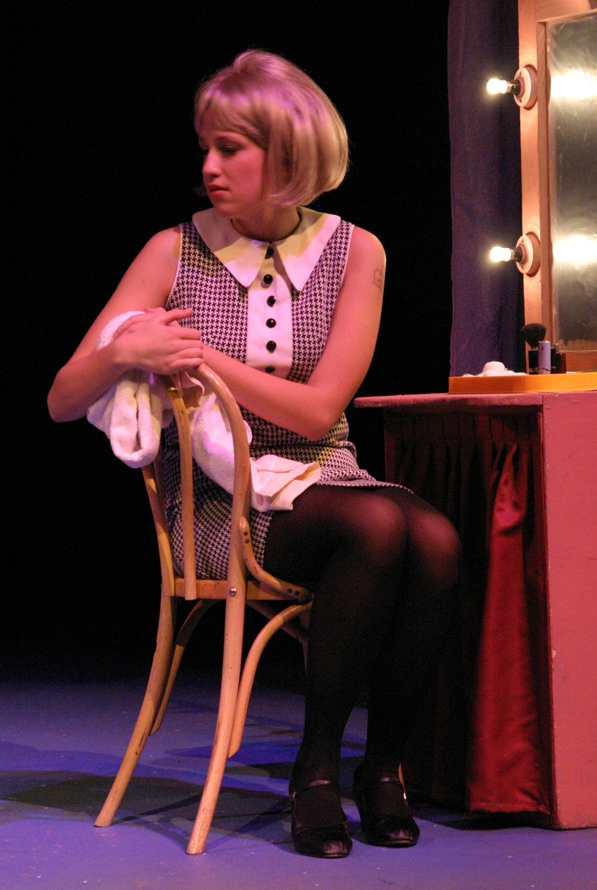 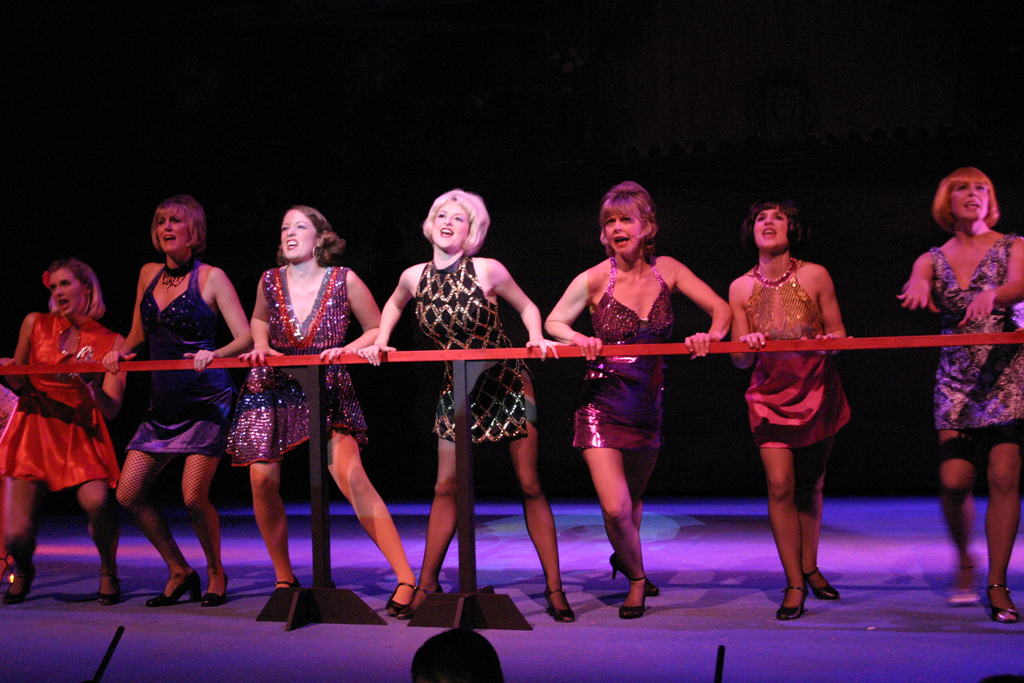 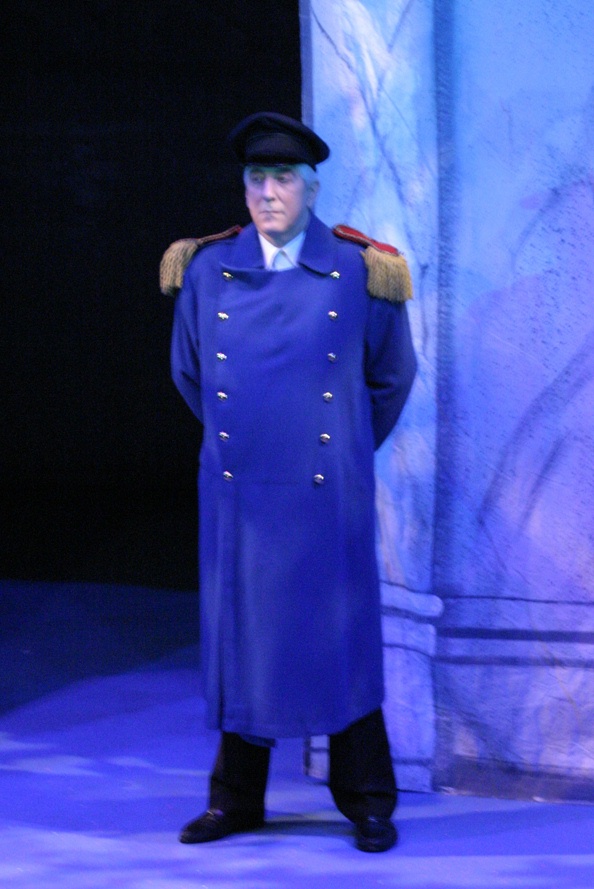 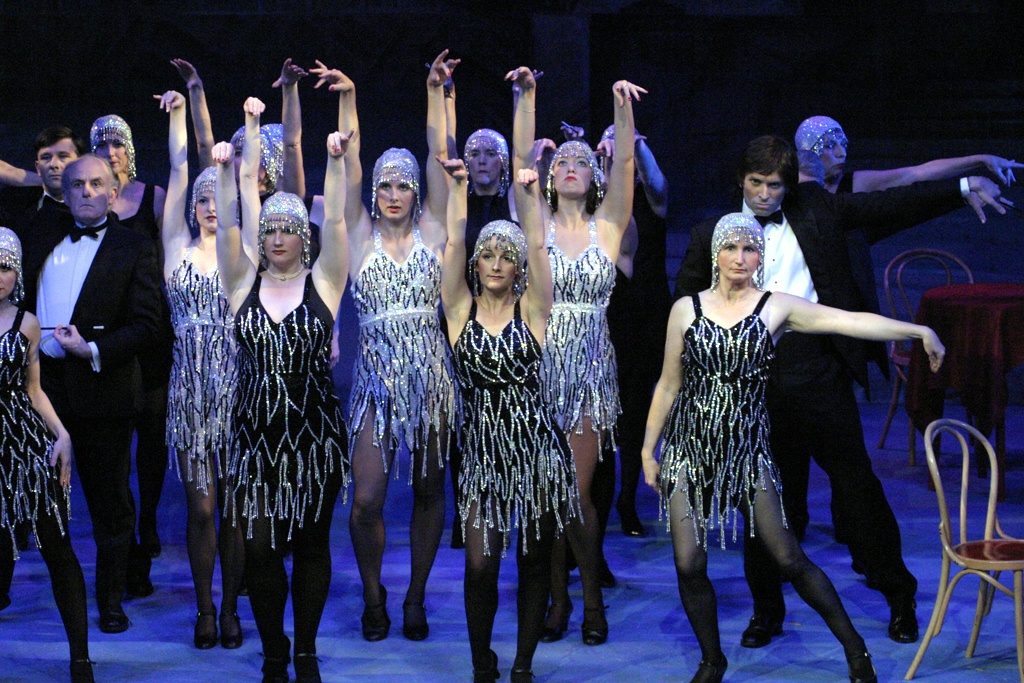 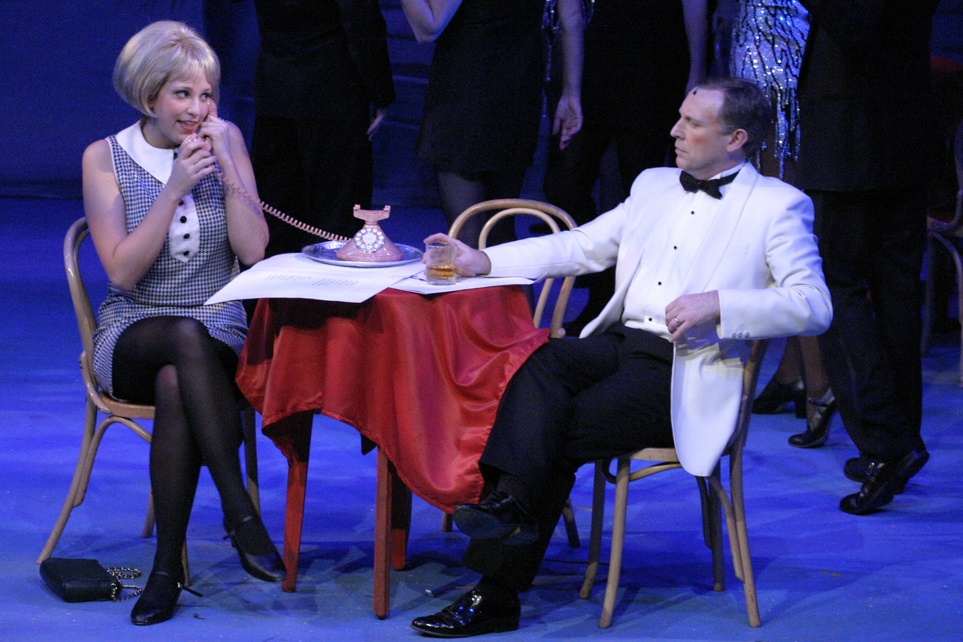 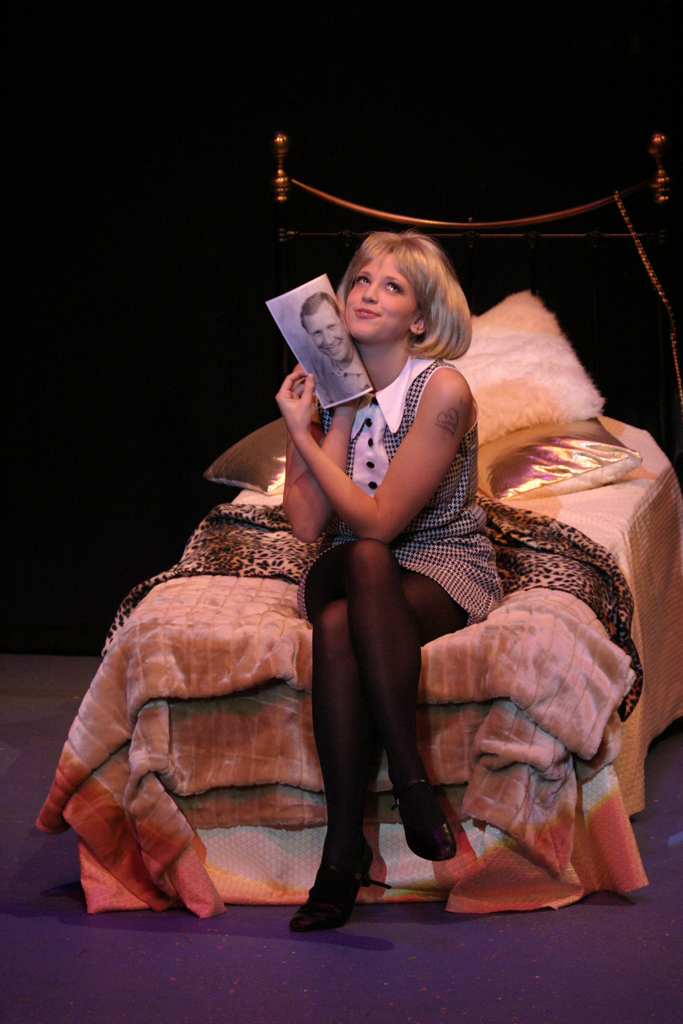 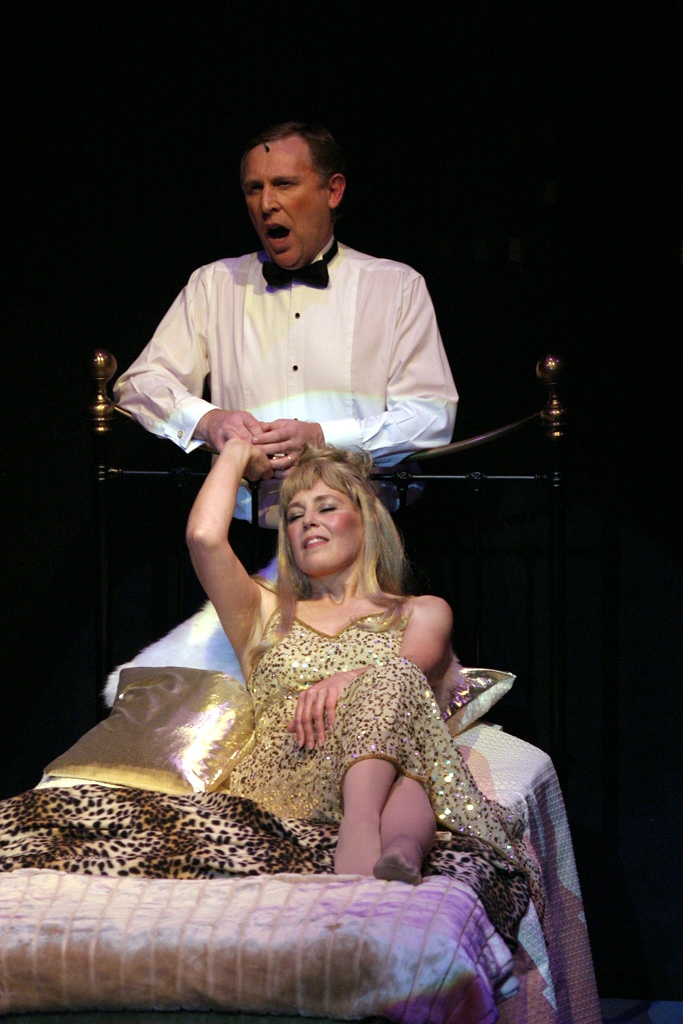 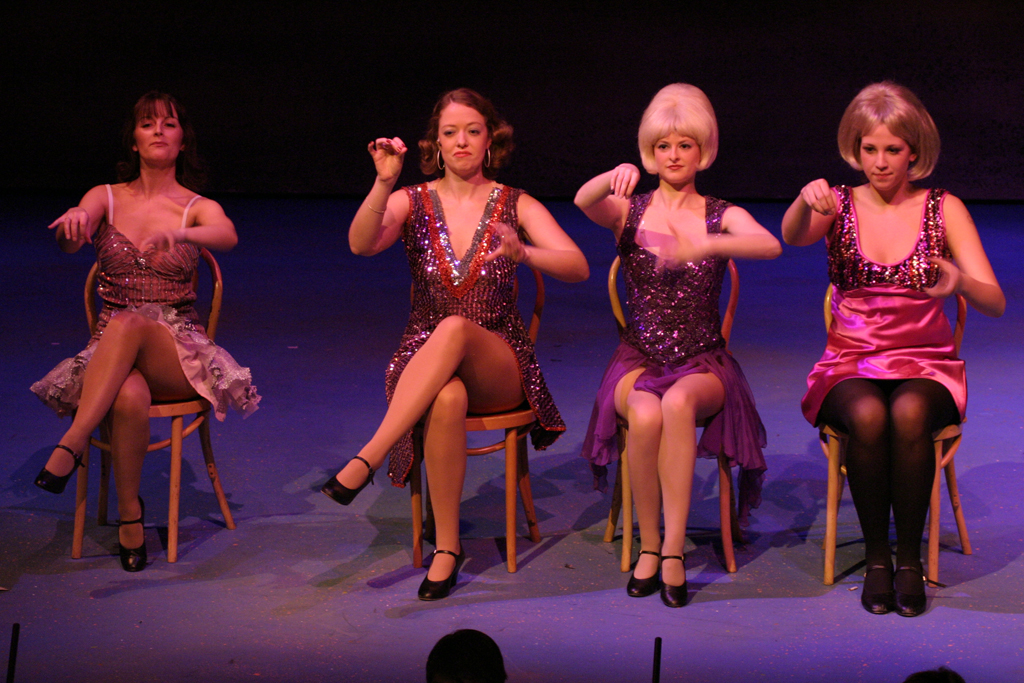 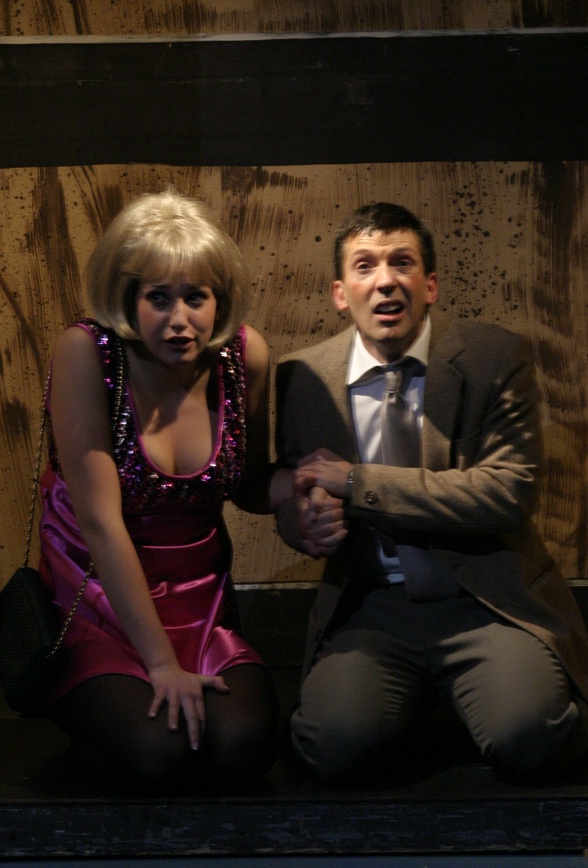 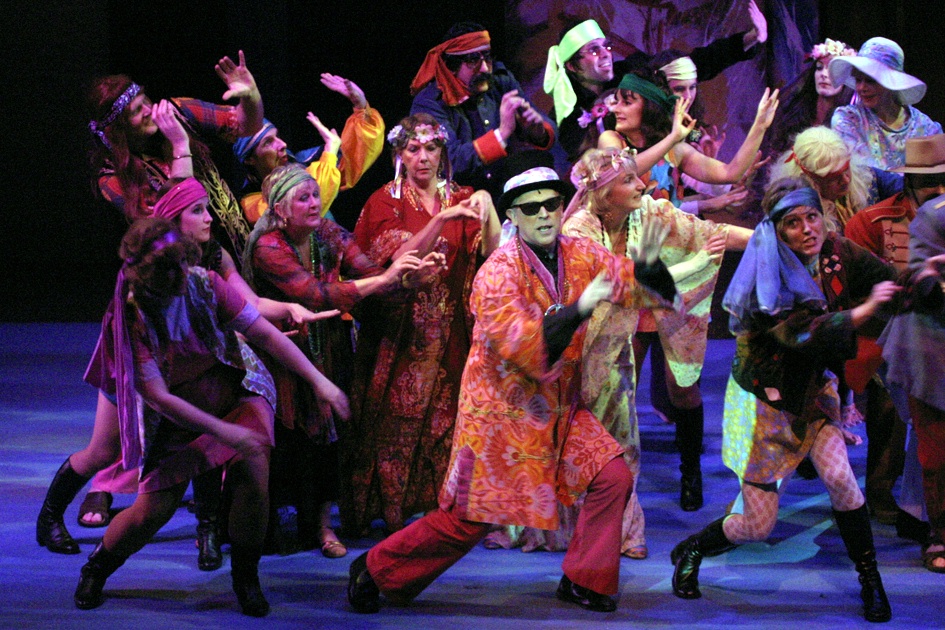 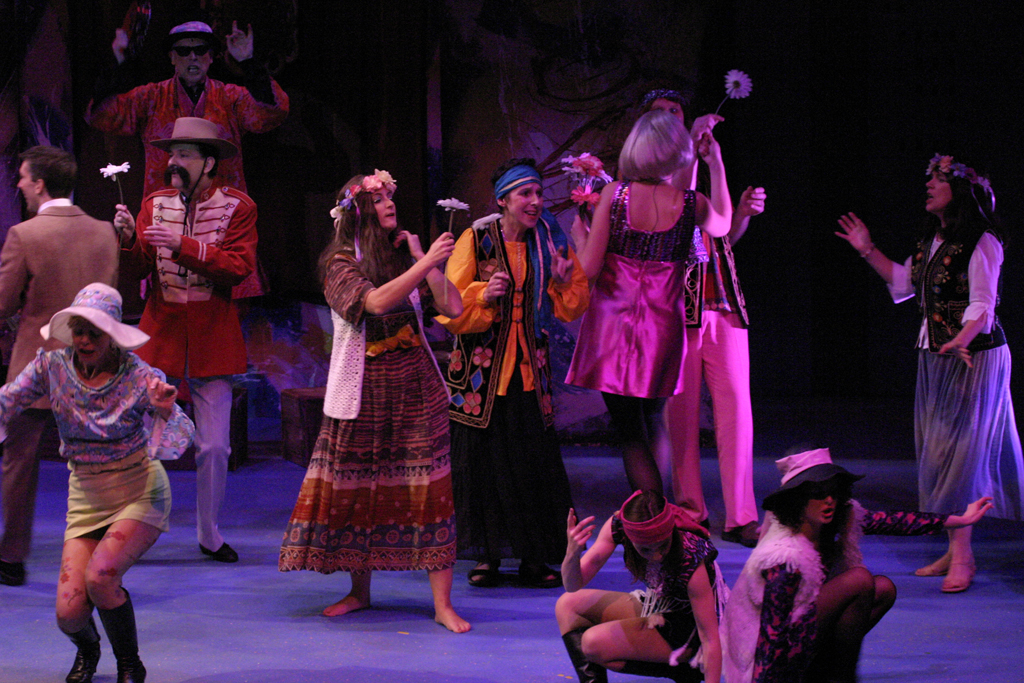 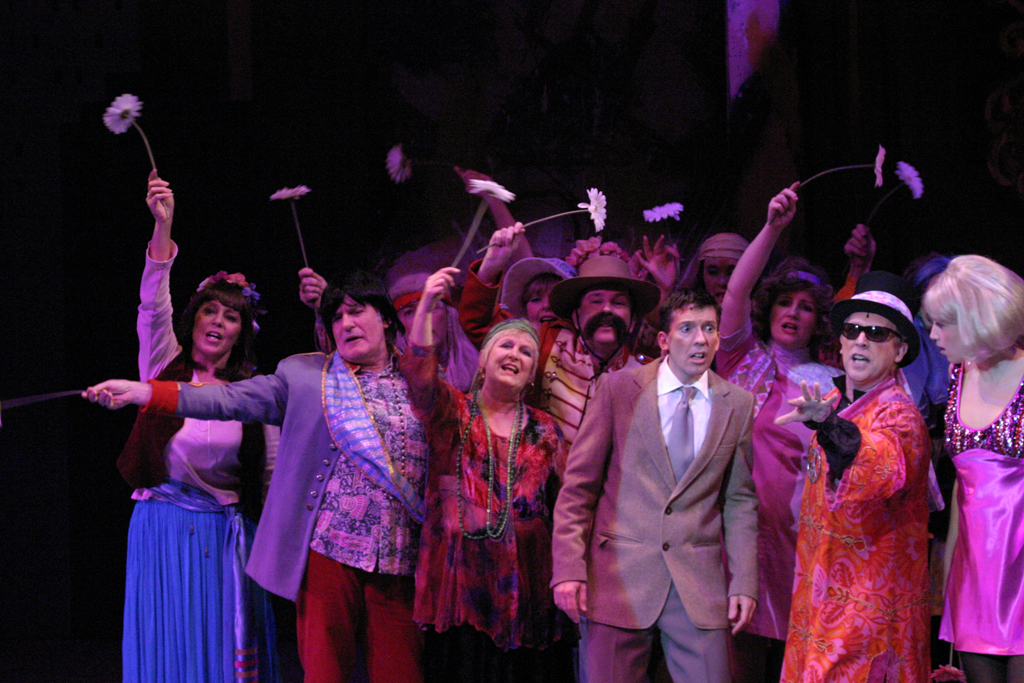 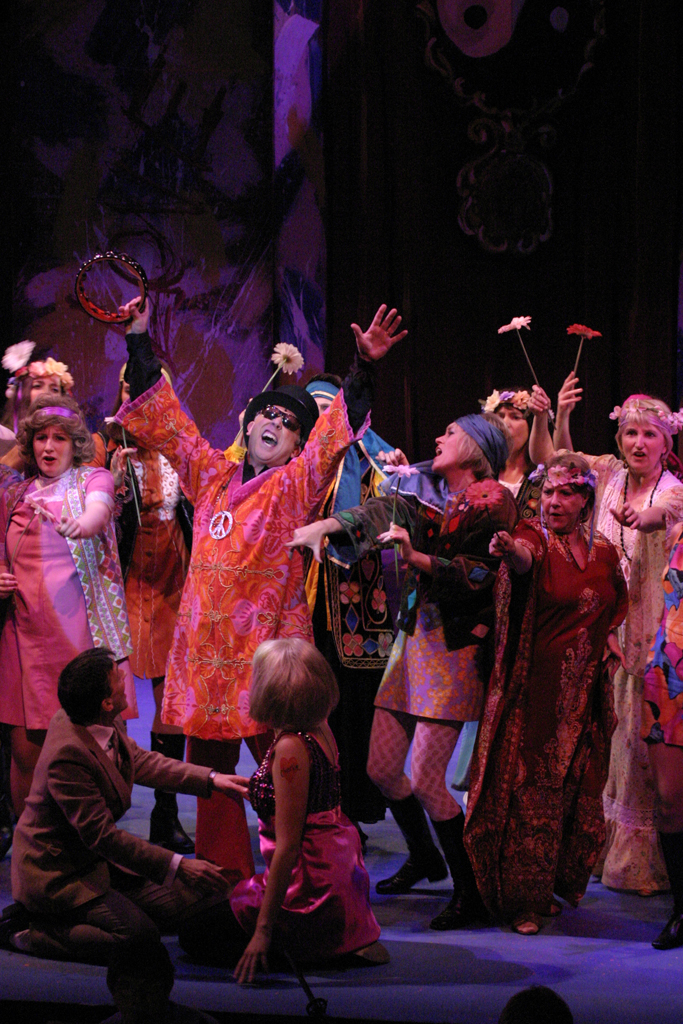 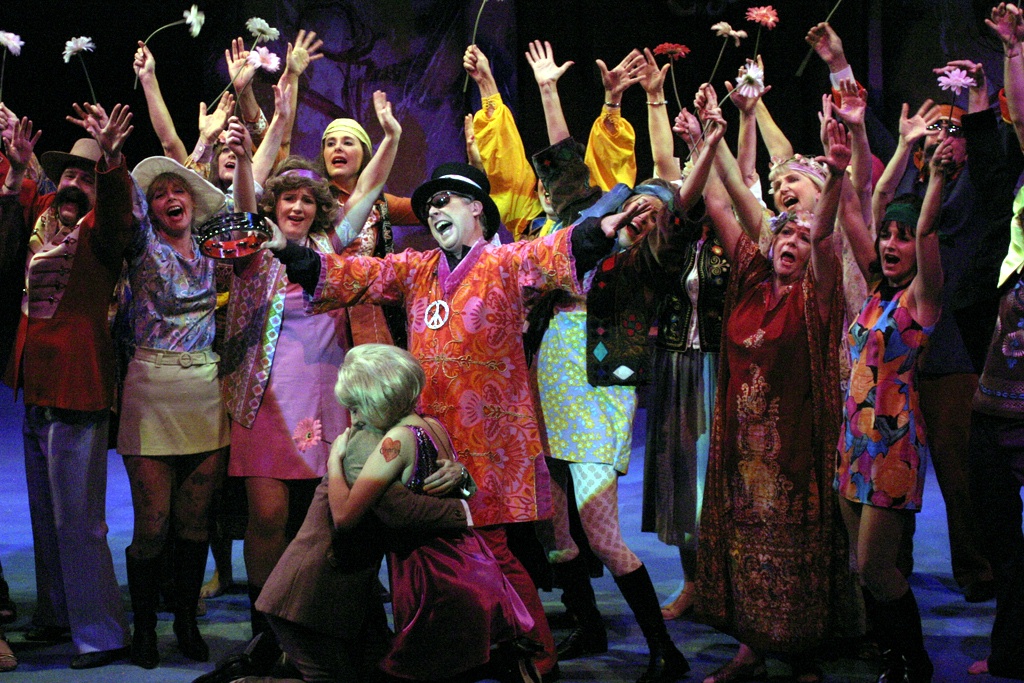 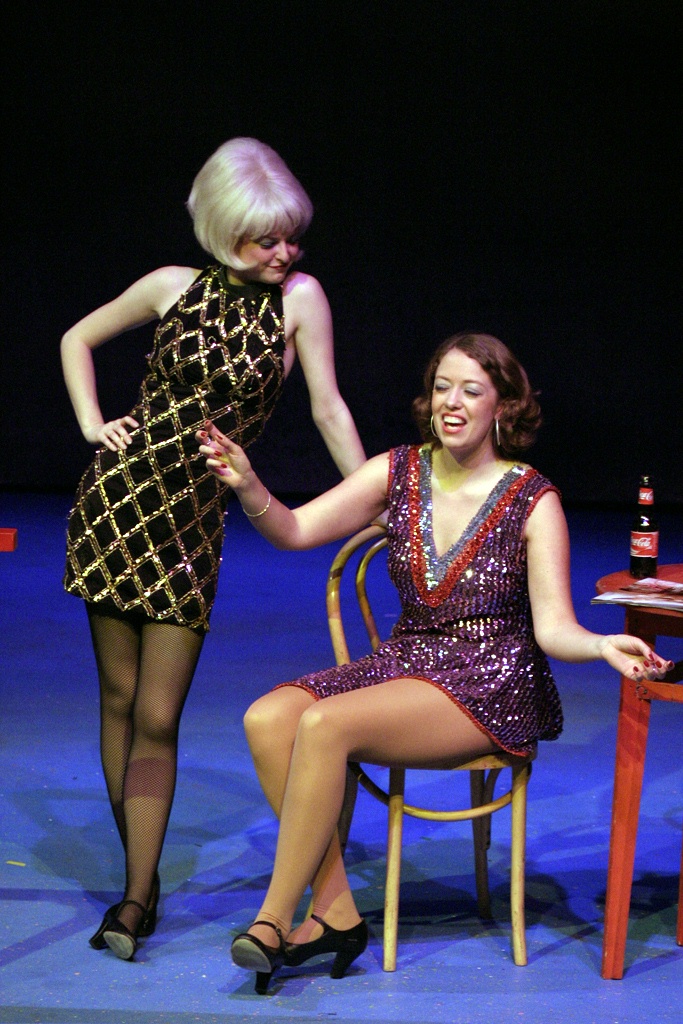 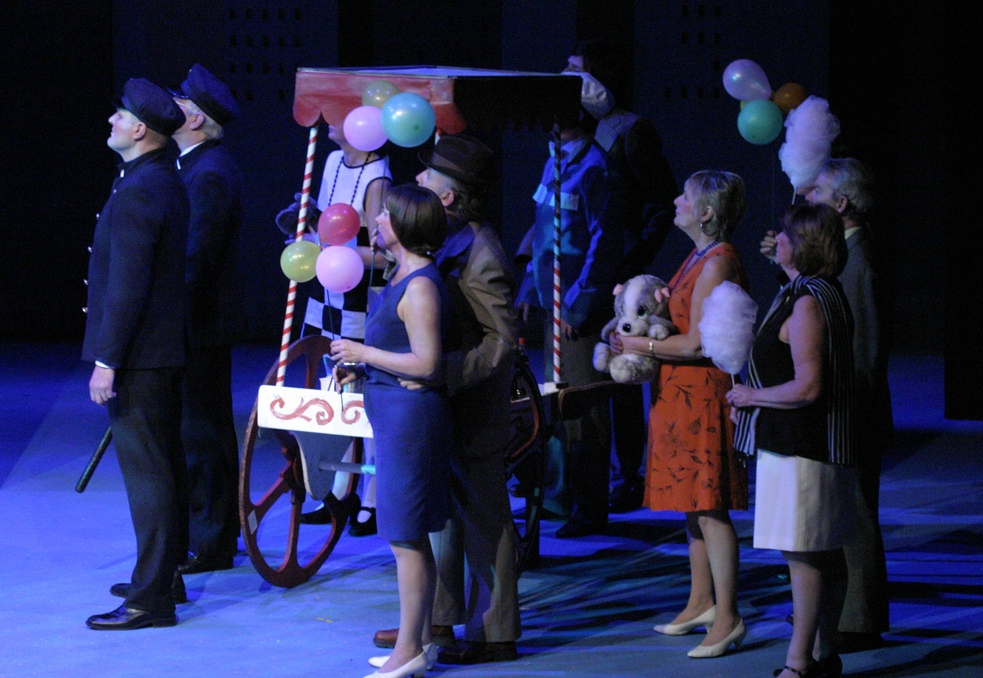 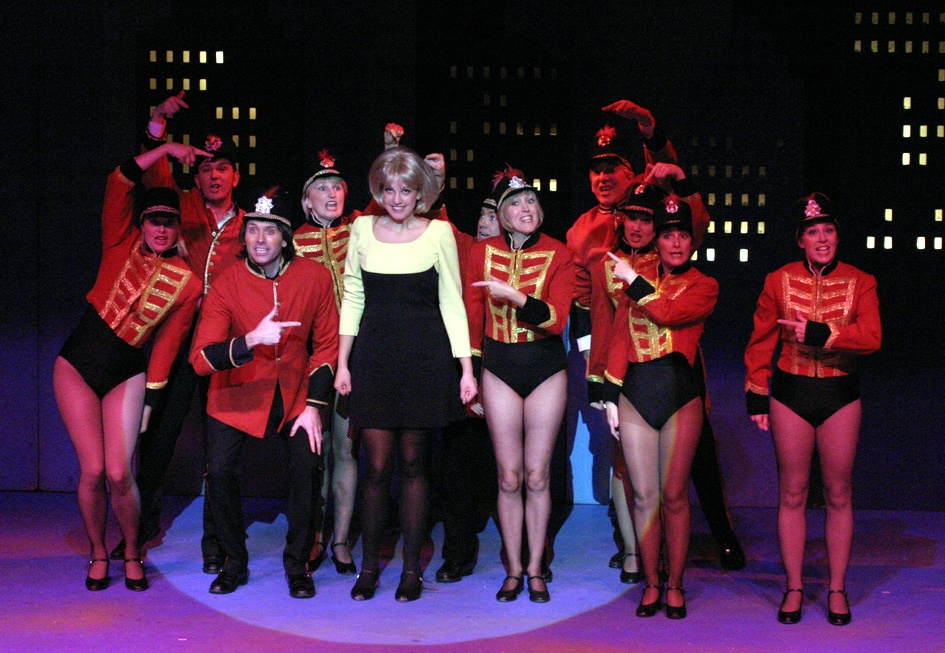 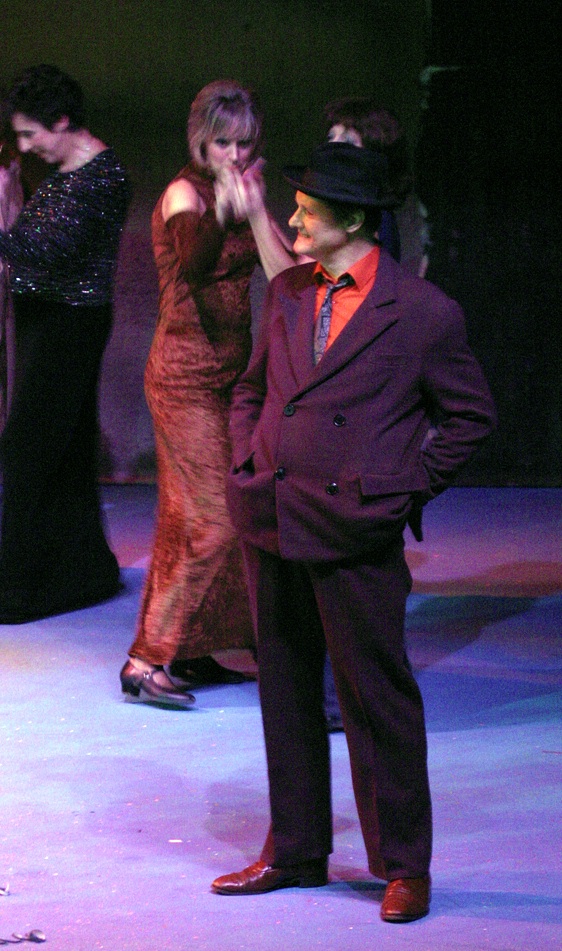 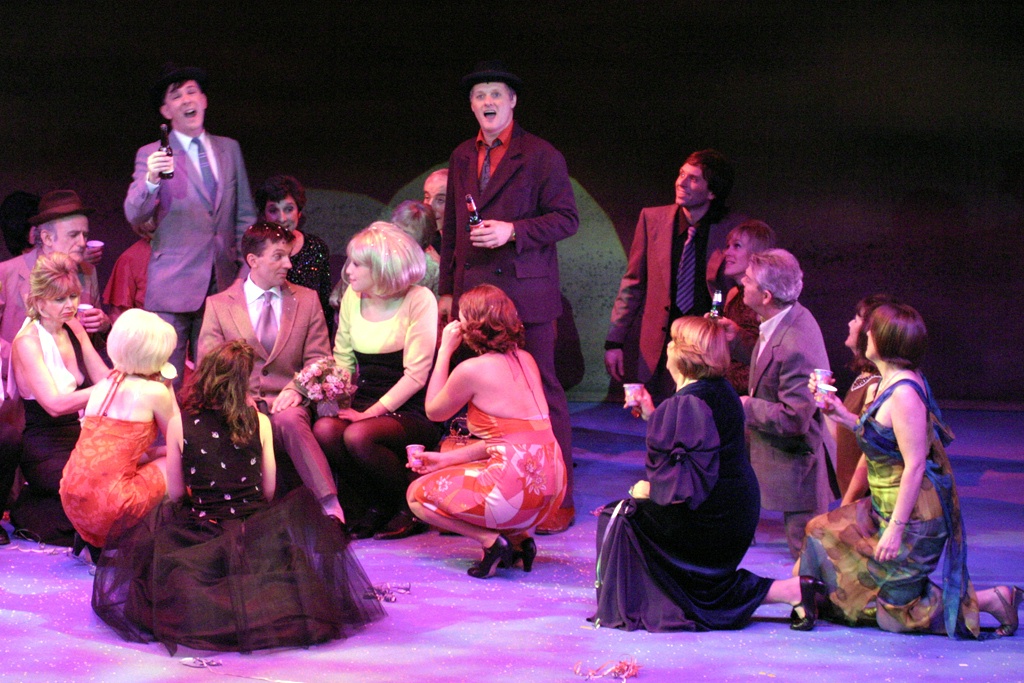 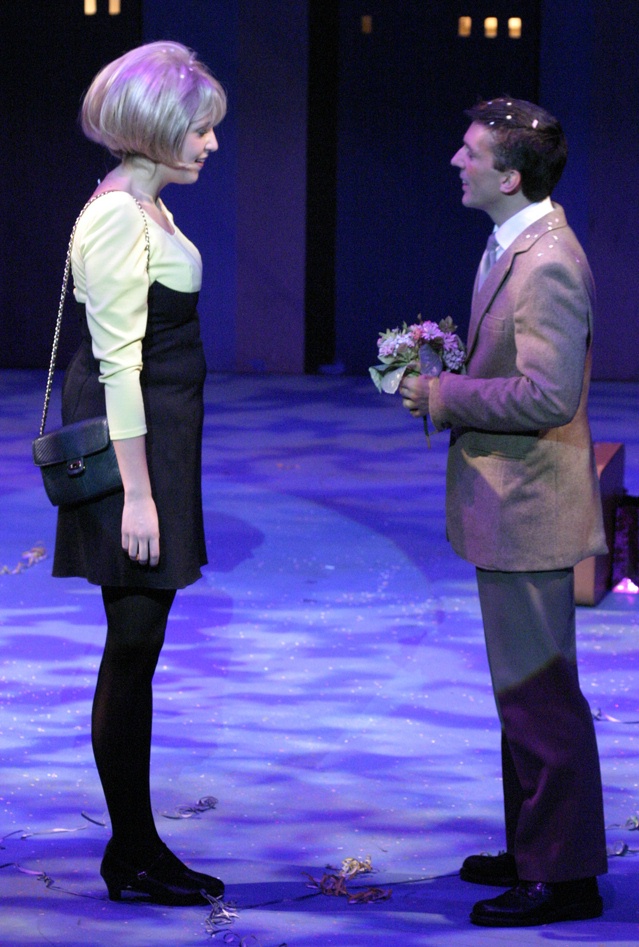 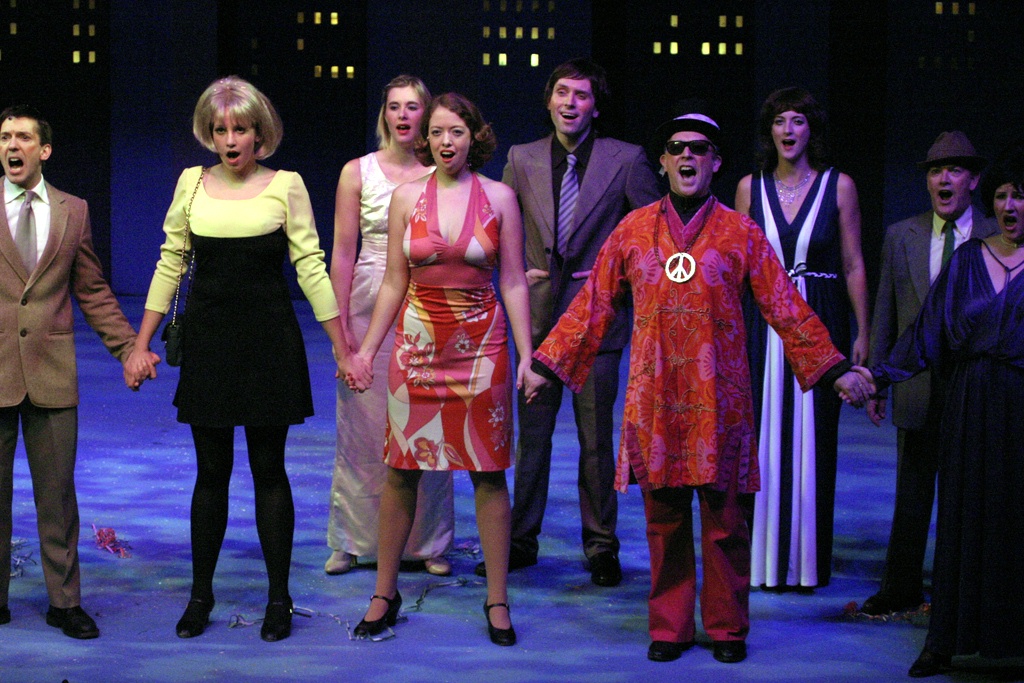 The lead role in this ever-popular show offers everything a young musical comedy actress could ask. Charity Valentine is on stage almost throughout and has to sing and dance her way through many of the show's best-known numbers. It's also a fine character part; she's an ever-optimistic dance club hostess who's magnetically attracted to the wrong men.

The Opera Club found a talent in many ways equal to the challenge, for their production directed by Gillian Jarvis. Eighteen-year old Katy Rudd brought a youthful vigour to the part, always giving the impression that, whatever her setbacks, she would land butter side up. Her singing was impressive in key solos such as If They Could See Me Now and she contributed strongly with other members of the team declaring I'm A Brass Band. Although she danced her routines well enough, these were not particularly complicated so this is a skill she may want to develop further.

We see three of the many men in her life. How could she be taken in by Charlie? Francis Radford established this charmless sponger without saying a word and gave an early hint of Charity's vulnerability. Kevin Stuart was totally convincing as Vidal, the Latin film star - sincere in his affection for Charity but always destined to go back to his demanding long-term girlfriend. It was, though, a pity that his apartment had only a single bed, which, surely, did not square with his romantic image.

We had more hope that Oscar, played with sensitivity by Chris Whitebread, would turn out to be her white knight. They edged their way towards each other realistically in their dialogue and interacted well in I'm The Bravest Individual but, when the crunch came, he couldn't reconcile himself to Charity's past and she's left to pick up the pieces yet again.

Kevin Stuart made the most of the opportunity to let his hair down when he reappeared, this time as hippy evangelist Daddy Brubeck, to lead Rhythm Of Life, a number that also showed the full ensemble at its best, both in its singing and movement.

Charity and her co-hostesses at The Fandango Club gave Big Spender a perfectly co-ordinated hard sell. Alys Dreux, Louise Forrest and Fiona Radford made a big impact in their belief that There's Gotta Be Something Better Than This. How many hours must have been spent honing these and all the other group numbers to this high standard?

The only discernible technical fault was that some scenes were under-lit, particularly noticeable on the extreme sides, downstage.

This production would not have been such a success without the crucial contribution made by musical director Angela Barker and her orchestra.

In spite of the fact that it has a score with many memorable numbers, this musical by Dorothy Fields and Cy Coleman appears to be tackled less often than most others by amateur theatrical groups. Maybe this is due to the fact that the role of the eponymous heroine is such a large one and many societies might not have an actress prepared or able to tackle it. Another reason might be that the plot mainly concerns some low-life or weak characters with whom audiences might not have much empathy, even though the prostitutes in the original story upon which it is based have been given a change of occupation into dance hall hostesses.

The story is told in numerous locations in and around New York in the 1960's and the stage settings to represent these realistically are difficult to reproduce on stage. For example, the orchestra pit has to be used to stand in for the lake in the park into which Charity is pushed and the lift into which she and Oscar become trapped remains rooted to the stage floor as does the cabin on the big wheel in Coney Island. The different locations require frequent scene changes to be effected and I wondered whether the cloths and trucks supplied by Scenic and Property Hire might not have been designed to allow this to be done more smoothly. Despite the efforts of an adequate number in the stage crew, the transition from one scene to the next was rather marked.

The range of costumes hired from the Isle of Wight Costume Workshop was large and of the quality that one has come to expect from them, with a particularly splendid set being supplied for the scenes in the Pompeii Club and for the band in Barney's Chile Hacienda. Perhaps the evocative flower power outfits used for "The Rhythm of Life" came from the performers own wardrobes!

Make up was fine with some first class wigs, those used for "The Rich Man's Frug" routine being especially remarkable.

The orchestra under the direction of Angela Barker tackled the first class score with plenty of attack, setting the tone for the evening with a dynamic overture and giving plenty of support to soloists and chorus throughout the whole evening.

In interpreting the piece the Director, Gillian Jarvis opted for a more romantic ending than has been chosen in other productions of this show, leaving Charity ever hopeful of satisfying her dream of being loved rather than being pushed in the lake yet again, this time by Oscar .

Some tip top choreography was a feature of this production with routines attributed to Gillian Jarvis together with Louise Forrest and Alys Dreux. Hours of dedicated rehearsal to some innovative routines were evident to complement the singing in "I'm a Brass Band", "Big Spender" and "The Rhythm of Life. The stylised movement sequences devised for "Rich Man's Frug" were carried out immaculately.

Katy Rudd gave an impressive performance as the heroine, very confident despite the fact that she is rather young and that this was only her second musical and the first in a principal role. She radiated a naivety in her portrayal appropriate to her years and projected an innocence that perhaps would not have been found in someone who had been a dance hall hostess for eight years. She has a talent that I am sure she will be able to develop to great effect either in amateur or professional theatre after she has finished her studies. As well as handling much of the choreography, Louise Forrest and Alys Dreux provided the interface between Charity's life in the Fandango Ballroom and the romantic one she desired. Of the two Louise seemed to be the more hard-bitten and sardonic in her comments and attitudes but both appeared to be resigned to the life that they were forced to live. Kevin Stuart epitomised the Latin lover in his depiction of Vittorio Vidal, amused by Charity's awe of his celebrity status. I enjoyed his singing of "Too Many Tomorrows" and later his transformation into Big Daddy to lead the singing in "Rhythm of Life". Chris Whitebread as the nervous, hesitant Oscar matched Charity in his naivety and Simon Cooksey demonstrated that even though he was prepared to work the girls hard in the ballroom he was a softie at heart at Charity's farewell party by singing "I Always Cry at Weddings."

Once again, my wife, Jackie, and I were pleased to be invited to come to The Harlequin for this production. We thank you for inviting us and we were grateful that Virginia King was able to spend so much time before the show to talk to us about the show and the difficulties that all societies are having these days in mounting productions of this calibre.