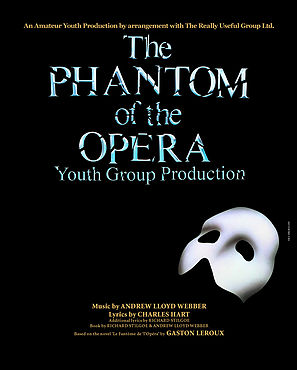 Based on the novel "Le Fantôme de 'l'Opéra" by Gaston Leroux

YESOS is thrilled to announce, in celebration of Andrew Lloyd Webber's 70th birthday in 2018, the monumental musical THE PHANTOM OF THE OPERA at the Harlequin Theatre, Redhill.

â€‹Based on Leroux's 1909 novel Le Fantôme de l'Opéra, the musical opened in London's West End in October 1986 and on Broadway in January 1988 where it has been running concurrently ever since, with the London production celebrating it's 30th anniversary in 2016. THE PHANTOM OF THE OPERA is the world's most financially successful entertainment event to date, grossing an estimated $6 billion worldwide and has played to over 140 million people in 164 cities in 35 countries. The musical won seven Tony Awards at the 1988 ceremony, including Best Musical.

Set within the 19th century Paris Opera House, and it's labyrinth below, the beautiful soprano, Christine Daaé, becomes the object of obsession of a mysterious, disfigured musical genius.

â€‹The musical features some of Lloyd Webber's best known songs, including Music of the Night, All I Ask of You, Think of Me, Masquerade, Wishing You Were Somehow Here Again and the titular song The Phantom of the Opera.

â€‹Auditions will be open to all YESOS members aged 11 to 21 years(due to licensing laws) and requires a large ensemble cast.

There are also dance opportunities for those with strong classical ballet and pointe technique.