The Yeoman of The Guard

It is set in the Tower of London during the 16th century, and is the darkest, and perhaps most emotionally engaging, of the Savoy Operas, ending with a broken-hearted main character and two very reluctant engagements, rather than the usual numerous marriages. The libretto does contain considerable humour, including a lot of punny-laden one-liners, and Gilbert's trademark satire and topsy-turvydom. The dialogue, though in prose, is quasi-Shakespearian in its language, being in early modern English. Despite its title, the opera is clearly about the Yeomen Warders rather than the Yeomen of the Guard. The character Sir Richard Cholmondeley, the Lieutenant of the Tower, is an actual historical figure. 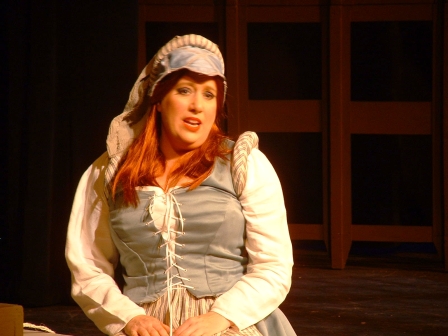 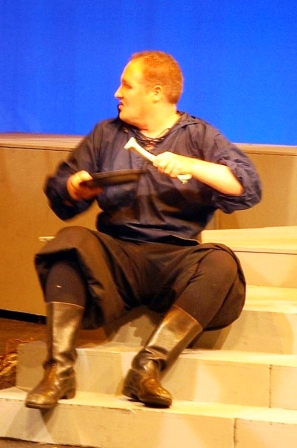 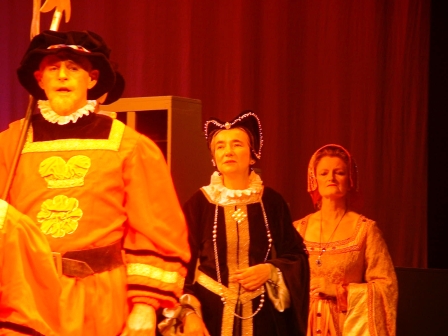 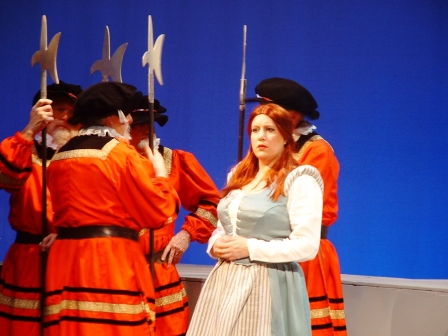 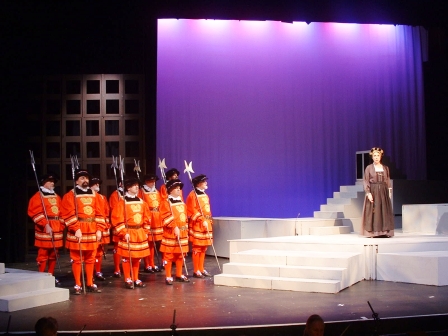 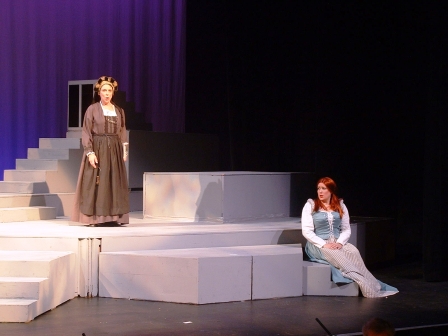 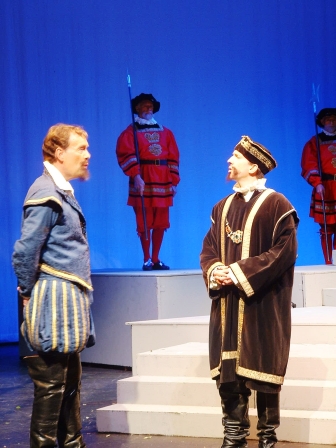 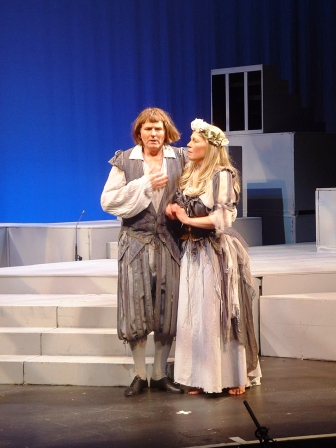 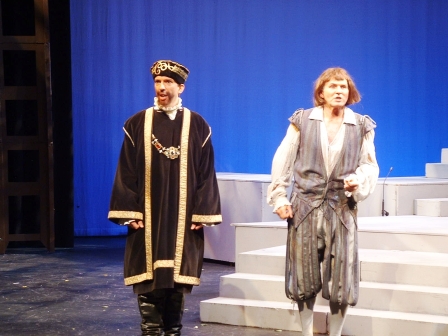 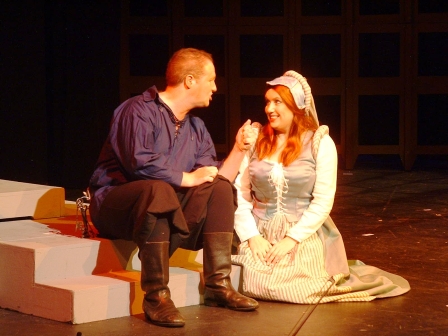 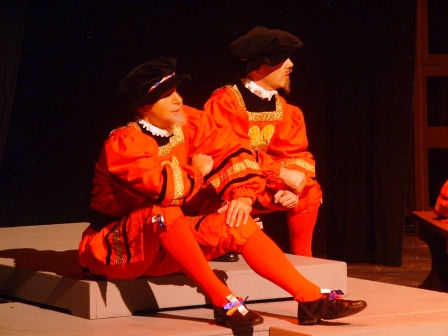 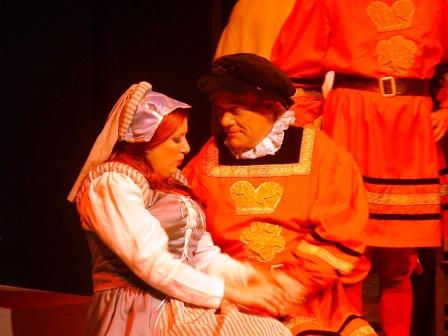 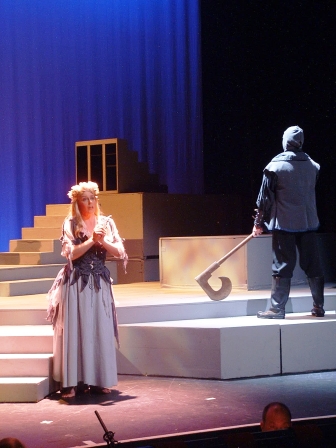 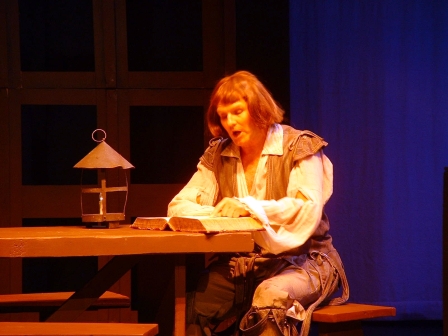 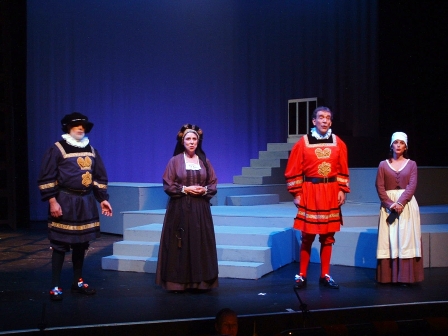 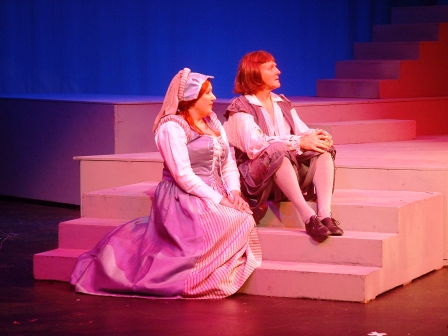 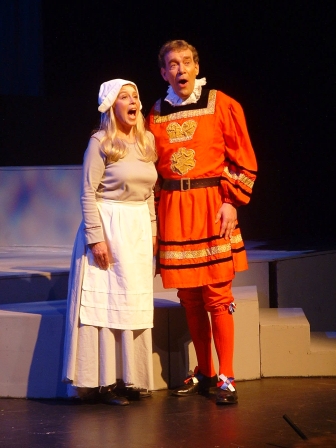 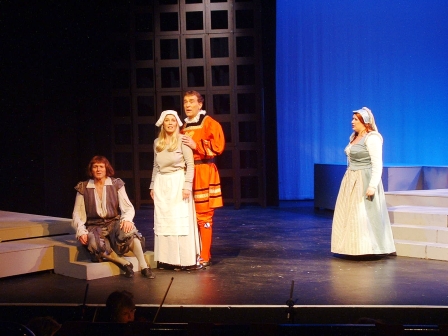 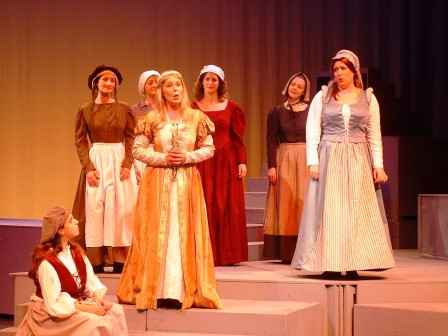 The Opera Club lined up a formidable array of talent for this, their sixth production of The Yeomen of the Guard, at The Harlequin, last week.

Artistic director Alison Cooper and musical director Angela Barker knew how to catch the audience's attention from the start; on stage, the citizens went about their daily business, whilst the orchestra served up an hors d'oeuvre of some of the music that has helped this become one Gilbert & Sullivan's most popular works.

Enter the love-lorn Phoebe, pining for Colonel Fairfax who has been falsely imprisoned and is about to be beheaded. Lynda Barrett's clear tones set the standard as she reflected on When Maiden Loves. Here, and in her other appearances, she not only sang note-perfectly but also brought her character to life. Similarly, Alastair Lindsey-Renton exploited the coarseness of the eminently unlikeable Shadbolt, the torturer. He managed to sneer, even when forcing a smile, and sang in the same crude voice as he spoke. Despite this, it was almost possible to feel sorry for him when Phoebe led him on in Were I Thy Bride.

David Brown, by contrast, epitomised the stiff-upper-lipped Fairfax, facing death stoically whilst asking Is Life A Boon? It was a pleasure to hear his clear enunciation of every syllable.

David Longes and Jane Hogg made an immediate impact as they burst onto the stage as Jack Point and Elsie Maynard. They moved and gestured well in one of the show's best-remembered songs I Have A Song, O. Point went on to share a show-stopping Hereupon We're Both Agreed with Shadbolt and Elsie showcased strongly in Tis Done, I Am A Bride.

Dame Carruthers, Brenda Judd, showed patriotic fervour when recalling When Our Gallant Norman Foes and Yeoman Neil Williams reflected on This The Autumn.

All trios and quartets were perfectly timed and ideally balanced. Ensemble work, always faultless, was never better than in the set-piece finales to both acts.

Grouping was always interesting, most notably in the full cast numbers, when the simple yet effective multi-level set was used to excellent advantage. Although the layout did, at times, restrict movement on the main area of the stage it was, overall, a sacrifice worth making. The only real downside in the production was the unbalanced sound, which meant that although some performers could be heard perfectly, others were not always audible.

The closing image of flowers, laid by Elsie where the heart-broken Point had fallen, was the final touch in a show that left many memorable images.

It is understood that this operetta by Gilbert and Sullivan was written when Sullivan was feeling very unhappy about the frivolous nature of much of their earlier collaborations, and when he was wanting to produce something more in the grand opera tradition. At the time it was being conceived, neither of them were enjoying the best of health, and therefore it lacked the humour associated with much of their earlier work; the humour being confined to the rather laboured witticisms with which one of its leading characters, Jack Point, attempts to justify his reputation as a jester or man of mirth.

Perhaps one of the considerations justifying its choice by some amateur musical companies is its requirement for a single set for both Acts. The ones usually chosen consist of flats and cloths suggesting the walls of the Tower of London surrounding a flat stage area representing Tower Green. For this production Alison Cooper avoided this conventional setting and devised a set almost entirely consisting of rostra. Their size, shape and positioning gave it a clean, modern look, but when combined with the style and colouring of the costumes allowed the piece to be firmly set in the medieval period in which the action was deemed to take place. The rostra were complimented by a large portcullis type structure upstage right to confirm the impression of a castle, which enhanced the very attractive setting in which the tale could unfold. The use of rostra allowed for the positioning of individuals on different levels to underline their importance in each scene, and provided several distinct floor areas in which groups of characters could be located according to their relevance to the action at any particular time.

Whilst the orchestra was playing the overture a few of the leading characters were observed on stage. These included Phoebe, looking rather sad as she contemplates the fate of Colonel Fairfax, and Wilfred Shadbolt, who by his attempt to trap birds gave an indication of his vocation of jailer and tormentor. The orchestra was directed by Angela Barker with her usual skill, interpreting the score feelingly, with a pleasing balance of tones expressed in a suitably stately manner.

The effective use of different colours on the cyc at the rear of the stage, together with the use of gobos helped create atmosphere and mood, as did the hand held “candles” with which the opening of Act 2 was lit. Lighting of individual characters was achieved in a subtle manner, with the level of their illumination being gradually increased instead of being harshly spotlit.

Most of the cast chosen were able to offer considerable experience in performing with your company as with others. As a number of them had or were receiving formal vocal training it is hardly surprising that they all sang well. Amongst these was David Brown playing the hero of the piece, Colonel Fairfax, who sang in a most praiseworthy manner. Although with her blond hair hidden we might have had difficulty in recognising Lynda Barrett playing Phoebe, there was no mistaking the quality of her singing. I was a little concerned that David Longes as Jack Point touched his hair as if to assure himself that his wig was in place, only to find, at the end, that its wearing was essential to his interpretation of the character. Alastair Lindsey-Renton provided a more humane portrayal of Wilfred Shadbolt than is usually seen, appearing to be a little more slow, dull and vacant person, rather than the evil, obnoxious individual that is often offered. He was completely in character throughout, including his curtain call. Jane Hogg was a very attractive Elsie Maynard and delighted us all with her excellent soprano singing. It was a great pity that Sarah Esser, after months of rehearsal, should have a car accident immediately before the show, and it was fortunate for your society and brave on the part of Brenda Judd that she was able to take over the role of Dame Carruthers with virtually no rehearsal. She was obviously very familiar with the part and I am sure that few in the audience would have been aware of the change if an announcement had not been made. In smaller parts I thought that Neil Williams’ singing was particularly noteworthy with “This the Autumn”, as was Chris Whitebread in his depiction of the Lieutenant. All those with solos were well supported by a large and vocal chorus.

The gesture of placing a flower at the point where Jack Point died instead of having him take a bow during the Curtain Call provided a poignant moment to end an excellent show.

My wife, Jackie, and I were very pleased that you should have invited us once again to one of your first class presentations in the tip top venue that is the Harlequin. We thank you for looking after us so well with the chance of having a chat with Ginny King before the show, and with Alison Cooper and Ginny whilst enjoying your hospitality during the interval.